By From Staff and News Service Reports
Cheney Free Press

Air quality to deteriorate over weekend 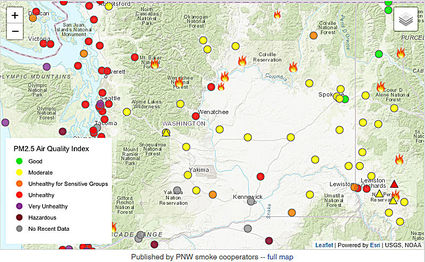 SPOKANE -- Officials at the Spokane Regional Clean Air Agency are warning residents in the region that, depending on the winds and fire activity, air quality over the next several days is expected to worse.

According to a Sept. 10 news release, air quality today (Sept. 11) could possibly reach the Orange Range (Unhealthy for Sensitive Groups) or worse of the Air Quality Index (AQI). Saturday and Sunday, Sept. 12-13, the air quality could decline even further to the Purple (Very Unhealthy) or Maroon (Hazardous) range at times.

This worsening air quality forecast is due to poor ventilation and a gradual return to southwest winds, which will transport increasing amounts of smoke to Eastern Washington from wildfires in California, Oregon and Western Washington. The region will likely see impacts from the pool of smoke trapped against the eastern slope of the Cascades, followed by potential impacts from a very large smoke plume over western Oregon by late Friday.

According to statewide experts, air quality conditions are expected to decline even more on Saturday evening and Sunday.

Officials at the Spokane County Emergency Management Division are urging residents to stay home as much as possible and frequently check air quality forecasts while filtering air at home through setting HVAC systems to recycle inside air.

Residents shouldn't expect burnt orange to reddish skies as have been seen in other locations due to the smoke, but will likely experience hazy conditions with a lack of blue sky and the smell of smoke.