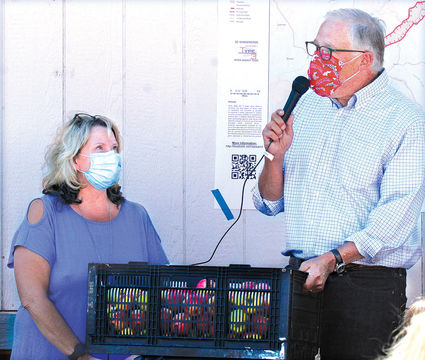 Gov. Jay Inslee, right, presents Malden Mayor Chris Ferrell with a box of Honey Crisp apples he said he and First Lady Trudi picked from a tree at the Governor's Mansion.

That was the message Gov. Jay Inslee gave reporters during a brief appearance about noon today, Thursday, Sept. 10, in one of two cities nearly wiped out by the Babbs Fire.

That press conference followed a presentation he made to town residents and leaders only minutes before, a presentation in which he requested all media be excluded.

Inslee arrived in a black SUV via Pine City-Malden Road, passing numerous "Culp for Governor" and "Trump" signs, both political opponents of the governor.

He also passed a still-smoldering grain elevator a few miles away in Pine City, as well as numerous burned out cars and destroyed homes and buildings.

As the governor, a Democrat from Bainbridge Island, neared and his representatives ushered reporters to a staging area a block away, locals gathered in a vacant field near Mayor Chris Ferrell's still-standing home to hear the governor and Congresswoman Cathy McMorris Rodgers, a Spokane Republican.

Only 27 of the city's 130 structures remained standing.

During Inslee's presentation, he presented Ferrell with a box of Honey Crisp apples he said he and his wife, Trudi Inslee, had picked this morning at the Governor's Mansion in Olympia.

"I hope you understand there are 7 million Washingtonians (who) want to wrap their arms around you. They believe Malden is going to rise again," Gov. Inslee said. "It's going to come back. And the state is going to be a part of that."

The governor then presented the "state's first assistance to Malden," the box of apples.

"We want to help you to the extent as humanly possible," he said, noting he's released several hundred thousand dollars from his emergency account.

"These are small dollars to help buy a pair of socks, OK, to get through these things," he said. "This is a small thing, but we want to help you get through it."

The governor said there would be a future "laborious process" to obtain federal funds to help Malden and other fire-damaged communities.

"That's not going to be a full replacement of what we need," he said. "We're going to do everything within our power to help Malden come back."

Minutes later and a block away speaking to reporters, the governor offered a slightly different message.

In addition to repeating his plans to seek federal funding to help the city and its residents, the governor said there are other things that need to be done.

Gov. Inslee said residents and visitors need to be more careful due to "changing conditions."

"The conditions are so explosive in the state of Washington due right now due to the lack of humidity, the heat and the wind," he said, urging caution.

He said the state needs to step up and spend more money on firefighting, as well as manage forests better.

"We're spending billions of dollars right now thinning our forests, so they are less explosive," he said. "That's not something you can do in a week."

Then he switched his message to his signature global-warming mantra.

Inslee said global warming has turned the state into a "tinderbox" and said the change "demands action by the state of Washington."

McMorris Rodgers used her time in front of locals to say it was a "miracle there was no loss of life."

While she began acknowledging law enforcement, fire and power officials, at least one resident heckled her. 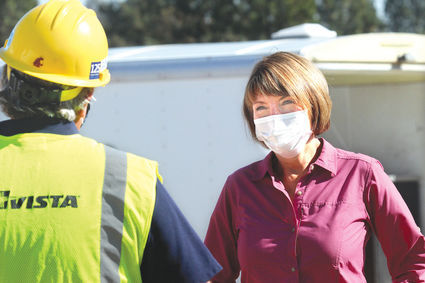 Congresswoman Cathy McMorris Rodgers, right, talks with an Avista worker about restoring power to the Malden and Pine City areas.

McMorris then turned her attention to fire resources, saying the "need is so great."

"We're going to stick with this," the congresswoman said.

Another resident countered, saying "I hope so."

Thanks from the mayor

"There was just no way we could get in front of this," she said. "Thank you to all who helped us get back into our community."