County Republicans sideline one of their own 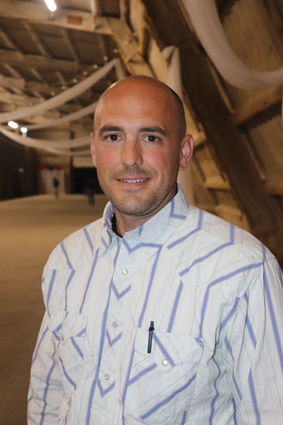 Republican Stephen Bauman is running a write-in campaign in the race for the Franklin County Commission No. 1 seat against incumbent Republican Brad Peck and Democrat challenger Kim Lehrman.

ELTOPIA - Franklin County Republicans disavowed one of their own incumbent candidates tonight, Thursday, Sept. 10, and decided to back a write-in candidate for Position No. 1 on the county commission.

By a 25-1 vote, the Franklin County Republican Central Committee opted to endorse write-in candidate Stephen Bauman, a local farmer and developer. By the same margin, the committee also opted to donate $1,000 to his campaign fund.

The move comes only a week after incumbent and former Republican committeeman Brad Peck failed to garner support from the committee in his effort to retain a seat he's had for 12 years on the Franklin County Commission.

Ten committemen supported Peck in a vote during a previous meeting and 19 opposed his endorsement.

Bauman announced his write-in candidacy Sept. 3, during the party's Lincoln Day Dinner Protest before more than 750 other Republicans and party leaders.

During tonight's meeting, Bauman asked for the central committee's endorsement before the vote.

In explaining why he decided to throw his hat in the political arena, Bauman cited three major reasons:

A lack of leadership, the decision to go along with coronavirus shutdowns and accountability.

Republicans in attendence peppered him with questions on opening up businesses now, funding for Benton Franklin Transit, road work, ever-increasing property taxes, alleged fraudulent receipt of travel reimbursements, privatizing the Trade, Recreation and Ag Center - now referred to as the Hapo Center after the naming rights were sold to the financial company for $100,000 per year for 10 years - among other topics.

"I'm humbly asking for your endorsement," he told those in attendance. "I need your help; I can't do it alone."

Only one committeeman voiced support for Peck

Bob Whitelatch called on his collegues not to "cancel 2,000 votes" cast by Republicans in the Aug. 4 primary election in which Peck eaked out a narrow win in a three-person race.

Whitelash warned of Lehrman's win should Republicans disavow Peck and choose to endorse Bauman as a write-in.

LaWanda Hatch, however, said the general election is already lost if the party doesn't choose to endorse someone other than Peck.

According to Hatch, several people have called her to say they're voting for Lehrman if she's the only alternative to Peck.

"Any politician whose been in office for 12 years and isn't trusted by their own party, I want out," Kyle Westover said, wrapping up the debate on who the party should endorse.