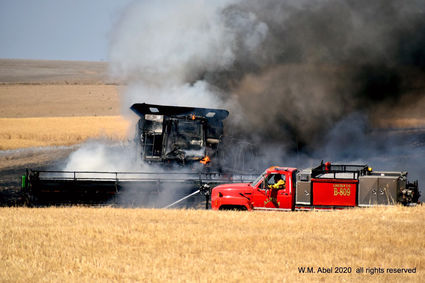 W.M. Abel | Special to The Record

An Aug. 10 combine fire near Almira creates clouds of black smoke as the equipment was fully engulfed in flames.

ALMIRA — An Aug. 10 wheat fire burned 50 acres near the intersection of Williams and Old Coulee roads, resulting in the total loss of a combine.

"There was a concern that the fire would spread to two homes and a homestead nearby, but the farmer disced out the crop in front of the fire and stopped it," he said. "In all my time firefighting, I've never seen a wheat fire stopped by water alone. There is just too much heat."

Pilar said most farmers are thinking ahead to the possibility of a fire, which helps crews to gain control of the situation.

No one was hurt in the fire and the blaze was extinguished in under two hours.

Pilar said his area of Lincoln County has two more weeks of wheat harvest, but fire season will likely extend into October due to dry scrub and brush.