Culp wins another county, loses one to Garcia 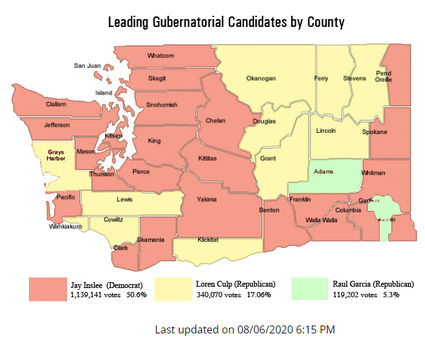 REPUBLIC - It's too little, too late.

While the shift in counties continues to narrow the gap, it won't make any difference in the outcome of the primary.

Ballots are still being counted from the Aug. 4 all-mail election because of additional time needed to verify ballots as well as delays caused by putting a ballot in the mail at the last-minute.

In Monday's statewide count, Grays Harbor County jumped from the Inslee to Culp, with the Republican police chief winning the county by less than 200 votes.

In Adams County, the win moved from Culp to Garcia, with Inslee a distant third.

Inslee, however, still has an insurmountable lead statewide with more than 50% of votes in his favor.

None of the remaining candidates broke the 5% mark.

Broken down by county, Inslee has won 26 of the state's 39 counties and Culp has 11. Garcia won the remaining two.

But, due to the number of conservative candidates in the field of gubernatorial hopefuls, the county breakdown doesn't show how close the battle for governor really is. 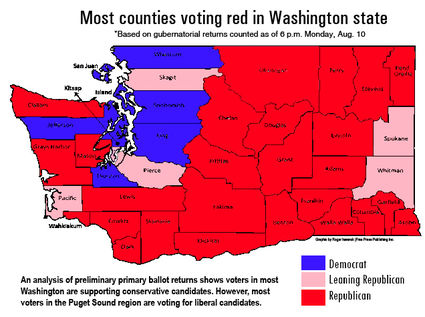 Democrats picked up 52.5% of the preliminary tally, while Republicans grabbed about 44.6%.

The remaining 2.9% of the vote went to independents, and candidates of other non-traditional parties, such as the Green or Propertarianist parties.

In comparing the Democrat vs. Republican county take, conservative candidates dominated the count.

Demcrats held more than 50% of the vote in eight counties - all in Western Washington.

The remaining 31 counties in the state are all leaning to the right, with several counties that could tip either way with more ballots.

Pacific, Pierce, Skagit, Spokane and Whitman counties had nearly as many Democrats vote in the primary as Republicans.