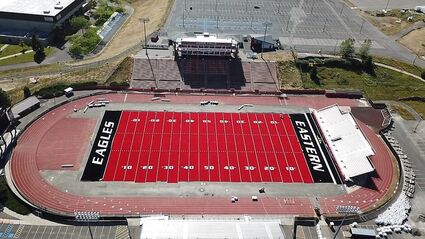 The new red turf at Eastern Washington University's Roos Field will likely have to wait until next year before it gets put into action by the Eagles football team.

OGDEN, Utah — A conference football season in which Big Sky powers Montana, Montana State and Weber State were slated to visit Eastern Washington University's newly-turfed Roos Field will have to wait until 2021.

On Aug. 7, Big Sky athletic directors moved an eight-game conference schedule to next spring, according to a release from EWU athletics. The Big Sky President's Council then approved the decision this morning, Aug. 7.

Nonconference games are still "under review," per the release.

EWU was slated to play Florida, Western Illinois and Northern Arizona in the nonconference schedule, but the Florida game was called after the Southeastern Conference elected for a league-only season.

The decision is the latest postponement in a slew of athletics affected by the pandemic. The Big Sky becomes the seventh Football Championship Subdivision conference to postpone or cancel fall football season, which likely means the FCS postseason will be postponed or canceled.

The NCAA recently said that if "50 percent or more of eligible teams in a particular sport in a division cancel their fall season, there will be no fall NCAA championship in that sport in that division."

There are 14 FCS conferences, so the Big Sky's postponement brings the division to that 50 percent figure.

Thus far, University of Connecticut is the only Football Bowl Subdivision school to opt out of the 2020 season.