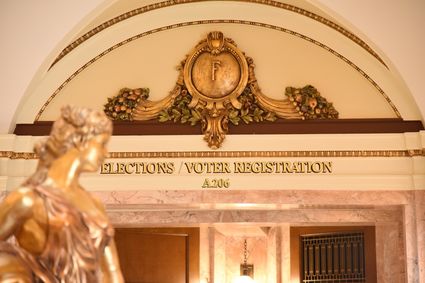 PASCO – Mail-in ballot security is not an issue for Washington State after 9 years of all elections using the system.

Sending ballots by US Postal Service has become a national controversy. There is a fear that election security could be compromised. It was suggested as a safer method than having people gather at polling places under rules to stop the spread of the COVID virus.

Franklin County voters are used to receiving their ballots in the mail, filing them out, then mailing or dropping them at a county dropbox. And, Washington State is not alone.

"On a national level we have five states that are all vote by mail - Washington, Oregon, Colorado, Utah, and Hawaii," said Jeff Burckhard, the chief deputy auditor for Franklin County. "When people said they are concerned to roll it out nationally, I would be concerned too."

With 45 states still using polling places for elections, they may not be prepared to make the switch to a new system and equipment. Three states, one being California, now allow people to request to vote by mail-in ballot. That leaves 42 without mail-in ballot systems.

"We've had a lot more time than others to implement policies and procedures," Burckhard said. "People are positive toward our local election office, but are not when they look at it nationally."

Washington State began allowing mail-in absentee ballots about 40 years ago and in 1991 voters could request to only vote by mail. In 2011, Washington State switched to all elections being mail-in due to a majority of voters using the new system.

One of the biggest concerns in Franklin County is when to mail the ballot, said Burckhard. The ballots must have a postal cancedllation stamp indicating it was mailed before or on the election day.

Franklin County mail is sent to Spokane to be stamped and sent back to the county auditor's office in Pasco, adding days between when it was mailed and when it will be stamped. If it is stamped after the election, the ballot cannot be counted, according to state law.

Burckhard recommends people use the six ballot drop boxes that are usable until 8 p.m. on election day. They are at:

Once a ballot arrives it goes through several procedures to be verified and counted before being reported to the state.

Two auditor's office employees place the external envelopes with the voters' signatures through a computer scanning system with a camera and the image is shown next to a record of the proper signature on file.

Most file signatures are from the voter's driver's license or their voter registration card.

"We verify all the signatures," said Burckhard.

Staff is trained by the Washington State Patrol to recognize fake signatures.

"We review them again with a second pair of eyes and if we can't recognize them to certify them. They are passed to the canvassing board, which is comprised of the county commissioner chairman, auditor, and prosecuting attorney," said Burckhard.

The canvassing board makes the final determination on whether a vote is valid.

Since Auditor Matt Beaton is running for re-election, Burckhard will take his place on the canvassing board and is conducting media interviews.

Once the signatures are reviewed and are found to be valid, the outer envelopes are sliced open while two people watch. Then two other people remove the secrecy sleeve and place the ballots into trays to be counted.

A Zip Tie is passed through the hole of the outer envelopes to guarantee they are done.

The ballot counting is not connected to the voter's identification. Once the ballot is out of the external envelope, they do not know who filled out the ballot.

The ballots are passed through a computer scanner in batches, said Burckhard. The machine is an independent system and offline – meaning it is not connected to the internet. This provides security against hacking.

"The results will be transferred to a (new) thumb drive and taken to another part of our (computer) system that is independent and those results are officially tabulated," said Burckhard.

The read-only information is loaded into a computer memory device and placed into a third computer system that is online with internet capabilities. The results are uploaded to Olympia.

To ensure accuracy and avoid tampering, a hardcopy is also sent to Olympia to make sure the data is correct. Olympia will also call to check with the auditor's office to make sure the information is the same and no one has tampered with the voting results, said Burckhard.

"Any issue on that ballot, the scanner in the system recognizes it and tracks the vote," Burckhard said.

Ballots with write-in candidates, when two candidates were selected for a race, torn ballots, unrecognizable marks, and other anomalies are all reviewed with state guidelines to determine voter intent.

The same process is used for questionable signatures.

When signatures don't match, voters are notified by mail and asked for a new signature sample. A follow-up call is made to let the voter know of the problem.

"We reach out to the citizen to let them know that hey we have a problem and need to get it corrected," he said. "If their vote wasn't counted, they will get a letter and a phone call, otherwise it will be counted."

Voters can check to see if their ballot arrived by using a state website - http://www.votewa.gov. 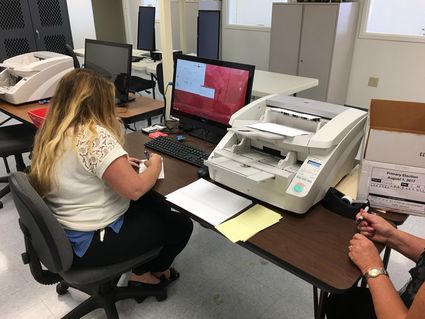 People often write-in Mickey Mouse or Bart Simpson, but they are not counted. Only official write-in candidates are counted. To become official, the candidate has to declare their candidacy with the state auditor's office for a state office and pay for the filing fee. Local races are handled by the local county auditor's office.

Sometimes people leave "love notes," various comments or criticisms, on the ballot but they don't know who they came from and it doesn't affect the counting process.

Burckhard said the state legislature is good at changing the system to improve accuracy and security. The auditor's office tries to help people understand how the system works when there are changes.

"When people have concerns, we encourage them to come down and see the process."