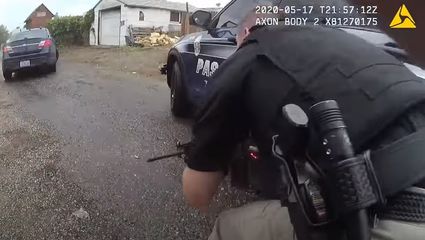 Pasco police released a video about the officers-involved shooting on May 17. Click on picture to see video.

PASCO — Pasco police released a video with body camera footage of a police shooting on May 17 that left one suspect dead and another injured.

The suspects were believed to have been involved with a homicide in Pasco last April. The investigation led police to a house on North 12th Avenue where the suspects exited into an ally and allegedly fired pistols at officers.

Chief Ken Roske and our Public Information Officer (PIO), Sgt. Rigo Pruneda created a video presentation to inform the public about the May shooting. It was released on Aug. 3.

"The presentation incorporates video from our officers' body-worn cameras (BWC's) and includes deadly force (shooting) and mild language; parents should use discretion around children," according to police.