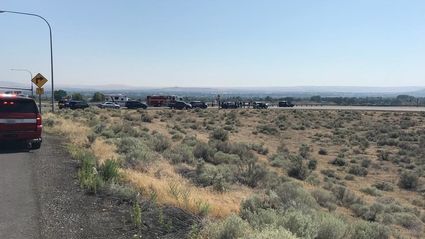 Investigators collect evidence of an officer-involved shooting on the offramp from highway 182 to Road 68 in Pasco on Thursday.

PASCO - A Pasco police detective shot a man armed with a pistol, hiding in the back of a car, on Friday afternoon.

Police officers stopped a vehicle on the offramp from highway 182 to Road 68 just after 3 p.m. According to police, 33-year-old Santiago Ayala-Pineda was allegedly trying to hide in the back of the vehicle but was spotted by officers.

Ayala-Pineda had a warrant for his arrest by Kennewick police for suspicion of assault in the first degree while using a weapon.

Officers reported they saw Ayala-Pineda arm himself with a pistol then refuse police orders to drop the weapon.

Ayala-Pineda was taken to an undisclosed hospital after receiving medical treatment by Pasco police officers and the Pasco Fire Department at the scene. His condition was not known on Friday night.

Corral is a 13 year veteran with the Pasco police is assigned to the Street Crimes Unit as a K-9 officer. He was placed on administrative leave following Pasco police policy.

SIU was requested to investigate the shooting by Pasco police Chief Ken Roske, stated Clary. The unit took command of the scene and relieved all Pasco police officers involved in the shooting.

Roske also requested two community representatives, who are not connected to law enforcement, to take part in the investigation with SIU. The community members visited the scene on Thursday night.

The addition of the community members is part of the Law Enforcement Training and Community Safety Act that took effect on Jan. 6 of this year improve transparency, police communication, the investigation process credibility, and the credibility of investigators, according to Washington Administrative Code (WAC) 139-12.

The SIU finished processing the scene on midnight Friday and began conducting interviews with witnesses.

"Anyone with information regarding this investigation [is] requested to contact either of the SIU supervisors," asked Clary.