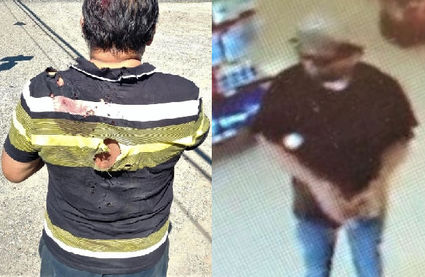 The buyer, on the left, was injured during the robbery. The suspect, on the right, is shown in a security camera image.

PASCO — The buyer of an Xbox was taken for a ride when the seller stole his cash and dragged him down the street on the outside of a minivan.

The buyer said he would meet the seller after agreeing to an online purchase. They met Tuesday morning in the parking lot of the 7-11 convenience store on Road 44 in Pasco to trade cash for the video game system, according to the Pasco police.

"After he had seen and touched the (Xbox), he passed the cash to the seller and reached in through the passenger window to retrieve his purchase," stated Pasco police on Sunday evening.

The seller drove off but the seller was hanging out of the window of the gold or tan colored beat-up minivan.

"The driver reportedly ran the stop sign turning west onto Court (Street), ran up and down a curb, and basically shook the victim off about a block down the road," stated Pasco police.

The buyer eventually fell off of the van and was injured, breaking his wrist, arm, and fracturing his skull. Police stated he also suffered from a brain hemorrhage.

The seller was inside the store before the robbery and Pasco police are asking for help in identifying him. Anyone with information is asked to contact Officer Eric Fox by email at [email protected] or calling 509-628-0333. Callers can reference the case as 20-20950 Robbery.

"We'd like to take the opportunity to once again tell the public that if you are meeting up with a stranger and you are taking cash or valuable property, feel free to meet 24-7 in the Pasco PD parking lot in front of the main entrance, where security cameras are always on," stated Pasco police.

When agreeing to online private sales, the police suggest making such exchanges at well-lit places with a lot of potential witnesses, if you don't want to use the police department parking lot.

"But remember, this victim followed those last rules are still got robbed," police stated. "Those sales-app accounts are easy to fake. Just because you are seeing a name and a photo, texting to an account, that doesn't mean that info is real. You are still going out to meet a stranger. And now, it's not even creepy when they show up wearing a mask. Be smart."