LaCrosse valedictorian on the farm 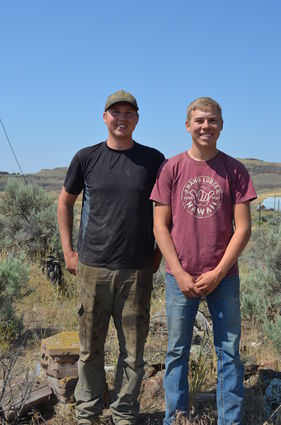 KAHLOTUS – T.J. Harder is excited to be carrying on the farming and ranching tradition started by his family generations ago.

After graduating as the LaCrosse Class of 2020 Valedictorian, Harder is putting in long hours on the family wheat farm before he heads to Washington State University in the fall, where he will double-major in Agricultural Economics and Business.

"College will be way harder (than high school), but I'm hoping it will be fun," Harder said while taking a short break July 3 from getting equipment ready for the harvest next week.

Hard work is nothing new to Harder.

"T.J. worked weekends and evenings during the spring, working around his school and sports schedule. In the summer, he works harvest consisting of 14-hour days, six days a week," LaCrosse High School Academic Counselor Codi Titus said. "Academically, he is at the top. He does not slough on classes."

Harder racked up a good share of college course credits while still in high school. That, accomplished while serving as president of the LaCrosse ASB his senior year, vice-president his junior year, and treasurer as a sophomore. Active engagement in FFA included serving as vice-president, and competing at Nationals in meats judging in Indianapolis and soils evaluation in Oklahoma. Harder was also a varsity member of the basketball and track and field teams; competing at state in javelin his junior year.

"I was hoping to go back again this year, until it got cancelled," Harder said.

He juggled his busy schedule while, at times, "living the bachelor life."

"T.J. has spent the last four years spending two to three months living on his own – caring for himself, keeping up on his grades, successfully participating in sports and FFA, as well as doing chores and maintaining the home ranch; while his mother moves to their calving barns an hour away during the winter months," Titus said. "I do not know many other students who could accomplish these tasks, and he does so seamlessly; with many of his teachers and coaches not knowing."

"In the winter, I would stay in the house in Hooper by myself," said Harder, whose brother Max, 22, stays at the main wheat farm in Kahlotus and sister Nicole, 21, works the Harder Hereford ranch with their mom. Their father, Eric, died in a tragic accident on the farm when Harder was seven years old, along with their uncle Kurt. "I had to learn how to cook. I can make pretty good Top Ramen," Harder said. "You learn responsibility. You have to do all the chores yourself, and wake up by yourself."

He does have lots of family in the area. Harder said four brothers moved to the U.S. from Germany, with three of them coming to Kahlotus and one settling in Kansas.

"So we have groups of Harders all around. Hooper, Ritzville, Sprague – there's a lot of us," Harder said. Brothers Hans and Jacob Harder were sheepherders before the family got into cattle and wheat.

"It's fair to say I'm just a third-generation farmer, because my grandfather's dad was a sheepherder," Harder said. "My grandfather switched to cattle, and took over the farm at age 18. He was real ambitious. He still is."

Their father's brother, Bill Harder, Jr., still manages the finances for the operation. The family's cattle operation runs about 1500 head, and the wheat farm has about 10,000 acres in production; rotating 5,000 acres per year.

"I've grown up here, and I always enjoyed doing it," T.J. Harder said. "I'm looking forward to what comes out in the coming years; to see if anything new arises. Right now, we don't run anything on GPS. But hopefully we will in the coming years, if we can with all the hills we have around here. With GPS, tractors will steer themselves. It makes it more efficient."

Harder knows efficient use of time, and he's quick to get a word in praising his classmates during the short interview.

"All my classmates were some of the best people I've grown up with, and I know they will do great things. They are all heading into careers they are passionate about," Harder said. "Trey (Fleming) is going into diesel mechanics, Matea (Enzweiler) is going into elementary education, Jasmin (Watson) is going into equine reproduction, and Lauren (Stubbs, Salutatorian) is going into agricultural education. She will be with me at WSU."

Harder was also quick to recognize those who helped him through school.

"The teachers, if you had a problem with anything, they would just jump right in," Harder said. "It's kind of a perk of being in a small town, especially in LaCrosse."