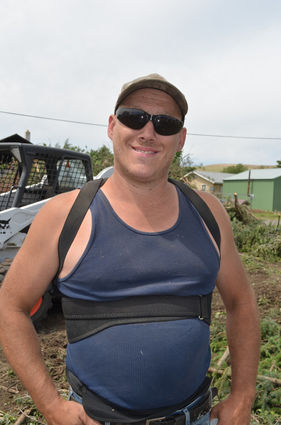 Long, who grew up in Washtucna and would have graduated high school in 2006, is now the city's maintenance man and on the road to being certified as the city water, sewer and maintenance specialist.

Long, 32, said after a short stay in Buffalo, New York following high school, he returned to Adams County, where he worked in Ritzville for a decade.

"I was running John Marshall's body shop, Landcraft Repair. I've been doing auto mechanics since I got out of high school," Long said, adding, "I'm proud to say all the knowledge I got that helps me out in this job, I got in high school."

Had he stuck it out and stayed in high school, Long said he would have graduated with honors in shop, welding, and construction mechanics.

"I dropped out and got married. I thought I knew everything," Long said. "I was a little bit of a butt-head as a kid, but I'm doing good as an adult. Now I have a job title and a vote on city council."

"Jay Lasan was the city head maintenance man, that's the position I'm going for now. My father, Joe Long, had a close relationship with him. Jay is my godfather," Long said. "My other uncle, Kenny Plumb, worked as his assistant city maintenance man."

Long is taking weekly classes in city water treatment. He'll work as an operator-in-training for a year, then test to get certified as a water treatment specialist. Long began the classes shortly after starting work with the city May 2.

"I've gotten lots of 'congratulations' around town. I'm a hard worker. Twenty minutes into the day, and I'm dirty," Long said. "My ultimate goal is to make the city look better than it did when I started."

Mother Nature upped the ante in his goal, less than a month after he started his new job, with the May 30 storm that blew through the region wreaking havoc in the form of downed trees and flooding throughout town.

"This being a natural disaster, we were willing to take care of people's yards. The city did it out of their own pocket," Long said. "We ran out of financing to do clean up, and we didn't have it in our budget to do tree removal. We have about 500 trees in the city, and we lost 60 in the storm."

Long said volunteers and city staff worked hard together to clean up the town.

"I saw a lot of volunteers, including a lot of elderly ladies – some of them council members – down here picking up. I want to give a special thanks to them; they helped me out a lot," Long said. "Our mayor, Brian Hille, put countless hours into the clean-up. He has a full-time job, but as soon as he gets off work he is out here repairing things for the city and helping me out."

Long also acknowledged Scott Blankenship as "one of the biggest benefactors" to the city's volunteer crew.

"Scott worked for 30 days straight, out here working and using his own tractor to help haul out stumps I couldn't get with the city's Bobcat," Long said. "I love that guy. He is awesome."

Long was in Bassett Park Friday, July 3, changing sprinklers on his day off.

"This is my first official paid holiday with the city," Long said as he re-positioned a sprinkler.

He pointed out a bird resting on a power line near a sign depicting several rare species to be found nearby.

"Washtucna is a key spot for bird-watching. I met some bird watchers from Buffalo who said Washtucna is the first place they've seen yellow-bellied finches and red-bellied finches in the same spot. If you happen to come to the park and see people standing there staring up at the trees, they're not just staring at the trees," Long said with a laugh. "Everybody loves this park."