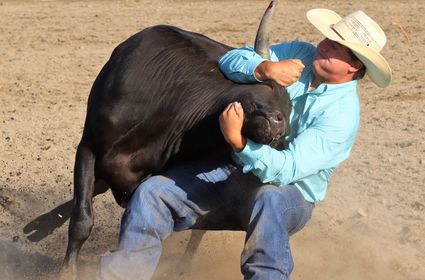 BASIN CITY — What do you call it when more than 3,000 rural residents get together for the Fourth of July to rodeo, parade, dance and shoot off fireworks?

Well, rodeo clown turned Freedom Rodeo announcer J.J. Harrison calls it a "cowboy protest," a protest in which ruralites build up America instead of tearing it down. Harrison, of Walla Walla, emceed the inaugural Freedom Rodeo on July 3 and 4 in this city of 1,100 people in Franklin County.

The mask-optional "protest" rodeo took place in defiance of Gov. Jay Inslee's coronavirus-related shutdown of the county, and the state. Indeed, Basin City and rural Franklin County residents volunteered their time, effort and money over the last several weeks to rebuild the arena that had not been used in more than 15 years.

Franklin County is one of only three of Washington's 39 counties stuck in a so-called "modified Phase 1.5." And until July 7, it is one of only a handful of counties in which the governor ordered all residents, workers and visitors to wear face masks.

But residents here aren't wearing facemasks. And neither were rodeo-goers, including gubernatorial candidate Dr. Raul Garcia, a medical doctor who takes issue with requiring masks.

Garcia brought 2,000 masks to the rodeo, just in case a few event-goers wanted to wear one. Few did.

Garcia himself was mask-free, which potential constituents here found refreshing. He also took time to discuss rural issues, such as water rights, with residents who had questions.

Garcia, a medical professional from Yakima, said the rodeo, parade and fireworks would help people's mental health, which is just as important and their physical health.

Garcia said he's at odds with Gov. Inslee, not just in the political arena, but also in the medical arena.

"We have opposite views," he said. "Surprisingly, we're looking at the same data.

"Government's job is to educate, not mandate."

Garcia also participated in the Basin City parade the morning of July 3, and stayed on to help direct traffic afterward.

At the start of the July 4 performance, Harrison called on volunteers who helped organize the event, rebuild the arena and provided supplies to join him to the applause of those in attendance.

He credited Scott English of Basin City with organizing the event.

English, however, said it was a "committee" effort and quickly directed the program back to the cowboys and cowgirls who traveled from throughout Oregon and Washington, as well as from out-of-the-region, to compete.

In an interview prior to the start of the rodeo, English said he organized the event to demonstrate that inalienable rights are not the governor's to take away through the coronavirus scare and the subsequent Black Lives Matter riots.

"They took crises and turned them into something unjustified," he said. "We had to create something to push back. Our rights were endowed by our creator, not Gov. Inslee, or whoever is in government.

"I'm tired of Jay Inslee telling me I can't do what God has given me to do."

Last week, Peck chastised Basin City residents and rural volunteers for moving ahead with a rodeo even as the county remains virtually locked down.

"I haven't talked to anyone yet who doesn't think this rodeo is a good idea," he said.

"This is a stand against the governor's orders," he said. "We don't believe everything we're being fed."

Johnston said more than 50 volunteers stepped up to help one way or another.

"On Memorial Day, we had our first meeting and Scott asked who was interested," he said. " we all said we were and jumped in."

Johnston said he put in about 60 hours in the last five weeks, but knew other volunteers put in many, many more than he did.

They built new rough stock chutes, repaired fences, brought in sod, cleared rocks and debris from around the arena and brought in bleachers.

"The last time the arena was used was 15 years ago," he said.

During each rodeo performance, announcer Harrison noted the same, adding that the effort lead to the creation of a new venue that could host the National Finals Rodeo.

Miss Othello Rodeo Brianna Kin Kade led the royal contingent for grand entry and helping out in the arena.

When the results of the July 3 and 4 performances were tallied, only one bullrider had a successful ride.

Austin Covington of Omak scored an 84 on the first bull ride of the two-day event; 12 other cowboys would fail to stay upright for a full 8 seconds.

The top cowboys and girls in the inaugural Freedom Rodeo included: 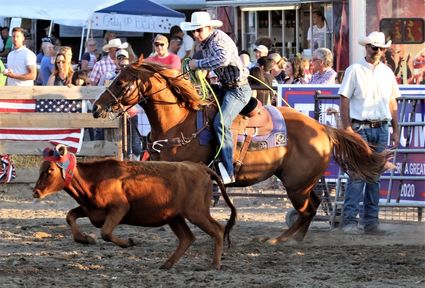 Steer Riding - Results of the youth event were not immediately available.

Greased Pig - Results of the youth event were not immediately available.

I love how the community rallied to come together to have fun AND to protest. YOU HAVE RIGHTS !!! This is a very inspiring story, great job, citizens of Basin City! Your town could not have celebrated your freedom in a better way. Are there houses for sale there? I think I am ready to move...... God Bless Basin City!