Governor extends quarantine until May 31 as protests erupt statewide 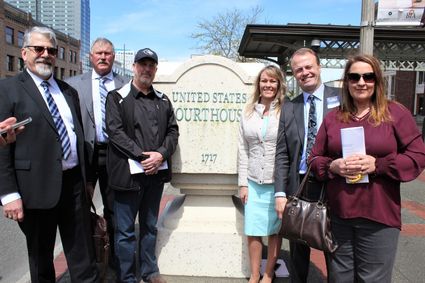 PASCO – Franklin County cherry orchardist and pilot Dave MacHugh was landing his private airplane at Tri-Cities Airport after a four-hour trip to Tacoma and back Friday afternoon, May 1.

Unbeknownst to him, as his plane touched down and taxied to the hangar, Gov. Jay Inslee was in the process of ordering Washington state to remain under quarantine until at least May 31.

Although the weather was ideal for a general aviation flight, MacHugh wasn't on a pleasure trip. He had flown eight passengers across the mountains; four of them - farmer and Franklin County Commissioner Clint Didier and business owners Dean Wellsfry, Lawanda Joy Hatch and Lisa Thomas - had just filed a class action lawsuit against the governor for denying them and other state residents constitutionally guaranteed rights.

Wellsfry is the owner of Shakey's Pizza in Pasco. Hatch is a wedding designer and planner, and Thomas is a registered nurse.

Initiative guru and Republican gubernatorial candidate Tim Eyman, and Okanogan County business owners Patty Detro and Jason Bernica were also named as plaintiffs in the lawsuit, as were "other nonessential Washingtonians."

That's the designation Gov. Inslee has given to people who lost their jobs when he ordered their "nonessential" employers to close due to the coronavirus pandemic.

Eyman joined the travelers in front of the U.S. District Courthouse in Tacoma, as did their constitutional attorney Stephen Pidgeon. Neither Patty Detro, a hair stylist and wife of Okanogan County Commissioner Jim Detro, nor Bernica, owner and operator of Sunrise Chevrolet and Extreme PowerSports, were able to make the trip.

Others aboard the flight included Franklin County Auditor and commissioner candidate Matthew Beaton, Thomas' daughters Loni and Lola, and a journalist to document the filing in U.S. District Court for the Western District of Washington.

Thomas and Didier spearheaded the lawsuit effort to hire constitutional attorney Stephen Pidgeon to take on the governor.

Before they boarded the flight, they had raised more than $27,000 to cover legal fees. And their support was growing by the minute.

Around the state, planned protests were taking place in many counties. A few last-minute protests even popped up in the hours before the lawsuit was filed.

Thousands were marching in Spokane. Hundreds amassed in Yakima and Wenatchee.

Even in the small town of Colfax - where their haven't been any confirmed cases of coronavirus - protesters gathered to call for an end of the "stay home, stay safe" quarantine order.

The first of the protests started at about 11:30 a.m.; many continued throughout the afternoon.

Meanwhile, Inslee said he will slowly reopen the state in four phases, with each phase lasting at least three weeks.

"We have not won this fight," Inslee said during his press conference, his fourth in a week.

In his previous three press conferences, he announced the limited reopening of "low-risk" construction, outdoor recreation and non-coronavirus-related medical care.

This time, Inslee announced he will allow retail stores to open up with "curbside pickup," automobile sales and car washes within two weeks.

Ironically, larger retailers have been offering curbside pickup for several weeks and others have continued to sell merchandise inside buildings. And many Eastern Washington golf courses continued to operate in defiance of the quarantine.

The governor also said he would allow drive-in church services.

Inslee said in about three weeks, he would consider authorizing camping, hair salon and barber shop services, and in-store sales.

Restaurants would be allowed to operate at 50 percent capacity, with no more than five people at any table.

In phase three, about mid-June, Inslee said he'd consider allowing gatherings of up to 50 people, team sports and the reopening of movie theaters and gyms.

Phase four, coming about July 4 barring further quarantine extensions, Inslee said he would allow bars to reopen with no more than 25 percent occupancy. He also said venues could then operate at full capacity for concerts, entertainment and sporting events.

That's not good enough to make Washington residents whole, according to the plaintiffs.

In their class action lawsuit - which will allow for all "non-essential" residents to seek damages from Inslee - the plaintiffs said "Defendant Jay Inslee has created an unacceptable tyranny in the state."

The lawsuit alleges Inslee has violated both the state and federal constitutions.

"His attempt to assert himself as tyrant has restricted and denied the liberty of all Washingtonians..." the lawsuit says, calling out the governor for failing to uphold the state and federal constitutions as required by his oath of office.

The lawsuit alleges Inslee has violated not only provisions of the U.S. Constitution but also state laws.

It also claims that the governor has no authority to quarantine anyone who is not ill and demands a minimum of $100,000 in damages for "pain and suffering, loss of liberty and injuries to property and income." It requests additional monetary compensation for violations of civil rights, attorneys fees and punitive damages suffered by the named and all "non-essential" Washingtonians.

The lawsuit seeks a declarative order that Inslee's quarantine orders have violated at least six provision of the U.S. Constitution and four state Constitutional provisions and laws.

In addition, the lawsuit seeks an injunction to prevent Inslee from any further actions that deprive plaintiffs of constitutional and legal rights.

Immediately after filing of the lawsuit, named plaintiffs took time to address a crowd that had gathered in front of the U.S. Courthouse at 1717 Pacific Ave.

The crowd carried signs and flags.

Motorists passing by the event that attracted about 200 people honked in support.

About a half-block away, four Antifa counter protesters stood silently with signs, flipping off honking motorists and protesters.

Only one dared enter the area of the protest - a young woman wearing all black, a Nazi-helmet and a gas mask. She carried an all-black umbrella and tried to block some protesters from observing the activities or take photographs of the litigants and their supporters.

She didn't sway the opinions of those who turned out to end the quarantine.

Didier took the lead on a microphone to address the crowd.

"We have a complaint filed and a case number," Didier shouted to the applause of the growing crowd.

"You cannot abort the Constitution. Federal law does not support the quarantining of people who are not sick."

Didier said Inslee does not have the right to delineate who is essential and who is not.

He pointed out that a minimum wage big box store employee is no more essential than a small business owner.

Shakey's Pizza Parlor owner Wellsfry explained why he joined as a plaintiff in the lawsuit.

"I'm here for my employees who are suffering," he said. "We're here for our lives."

Registered nurse Thomas picked up where Wellsfry left off.

"I am a citizen, not a subject," Thomas said.

The mother of three children teared up as she talked about the activities they were missing because of the unconstitutional quarantine.

She also spoke about the need to resume all health care, not just care related to the coronavirus that originated in Wuhan, China, and spread worldwide.

"All health care is essential," she said. "This is medical tyranny."

When it was her turn to speak, Hatch talked about the need to reopen businesses falling victims to the quarantine order.

"If they do not reopen, they will lose everything," she said of the business owners, while referring to the governor as "King Inslee."

"This is killing people, destroying people,:" she said. "We're losing our lives and our livelihoods."

Hatch said it's not fair that big box stores can open, but mom-and-pop shops were forced to close.

She chastised the governor for playing favorites.

Indeed, "all business is essential to someone," gubernatorial candidate Eyman said. "I don't think our governor believes that."

Eyman is among a field of Republicans trying to unseat incumbent Inslee, a Democrat who lives in the wealthy community of Bainbridge Island.

Others in the Republican field include Sen. Phil Fortunato of Auburn, Joshua Freed of Bothell and Republic Police Chief Loren Culp, the only Eastern Washington candidate in the field.

Freed has also filed a lawsuit against Inslee.

"More and more voters believe Jay Inslee is a snake," he said.

Eyman has launched a website to explain the lawsuit and help raise money to cover the costs.

"Sueinslee.com; that's not a relative," he said.

In closing the protest, Didier told protesters that "one size does not fit all."

"You can't lock down everyone," he said. "Restore our rights today."

Didier said Inslee has everything backwards.

"We've always quarantined the sick," he said, noting the litigants were not among the sick and therefore cannot be quarantined.