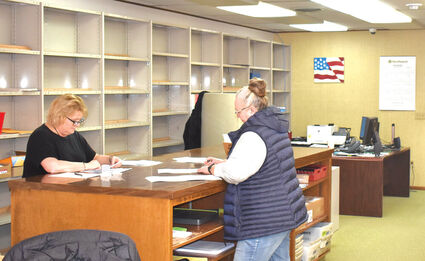 The alarm at 106 W. Main St., caught the attention of some area residents who had a police scanner and later notified The Journal after hearing the broadcast exchange between Police Chief Dave McCormick and a dispatcher.

Bates expressed concerns that the elections office had been left unsecured and uncounted ballots were potentially compromised.

"Chief McCormick was the responding officer," Bates said. "And I remind you that Chief McCormick is on record as a donor to the campaign of one of the candidates."

At the time the alarm was tripped, McCormick was about a half-mile away.

He parked in front of the building, observed that lights were on and asked dispatch to notify the responsible party.

He then pushed on the glass front door and it opened. Systematically moving from the entrance to the back alley door, he checked offices along the hallway.

"I saw no signs of forced entry at the front or back doors," he said. "And all the office doors on the right side of the hallway were locked."

Those locked offices contained ballots and a tabulating machine.

McCormick walked outside and awaited the Adams County elections administrator's arrival, after which they returned to the building's interior.

The administrator observed that nothing appeared to have been disturbed since 3:30 p.m. Thursday, records show, noting she remembered locking the front door.

But as McCormick observed, the front door had a tricky lock. It had to be turned one way to trigger the deadbolt mechanism, then turned back to get the key out.

"If you don't get that key turned all the way back, the deadbolt can disengage instead of locking into place," he said.

The elections administer then described the building's security system, including several cameras and a locked wire cage where ballots are kept inside a locked file cabinet.

She showed him cameras linked to her cell phone. Together they watched video - time-stamped at 3:06 p.m. - of a white male wearing a red-and-black jacket entering the front door.

"He might've been there 30 seconds," McCormick said. "He didn't try to get past the counter to the hallway and the back of the building."

At the time, McCormick didn't recognize the man in the video, he said.

McCormick and the elections administrator returned to the Main Street sidewalk. While they waited, McCormick saw a person matching the description of the man in the video.

He recognized the man, approached him and described what he had seen in the video just a few moments before.

"Yes, that was me," the man said. "I'm interested in politics and went into the Election's Office to get the update on the ballot count for the sheriff's race.

"I saw the lights were on and assumed the office was open. I pushed on the door and it opened, so I went inside. I didn't see anybody and noticed that the alarm had been activated, so I left."

McCormick also examined the front and back of the man's jacket.

"His explanation and clothing matched what I saw on the video," he said.

Continuing his investigation, McCormick asked the sheriff's dispatch supervisor to download video from elections office cameras. He learned that the cameras didn't activate during the 24 hours between Thursday and Friday afternoons.

The level of security at the elections office, McCormick's discussions with the person who briefly entered the building, the election administrator's observations, and the lack of camera activations at linked offices - all bolstered their conclusion that ballots had not been improperly viewed or corrupted.

Yet, why the front door was not locked remains a mystery.

And although custodians and Auditor's Office staff have keys to the Election's Office, Auditor Hunt expressed confidence staff did not enter the building between Thursday and Friday afternoons.

Her assessment agreed with McCormick's review of camera activation data from the Sheriff's Office.

Hunt said the building's security system - installed in 2020 with grant funding and recommendations from the federal Department of Homeland Security - keeps ballots secure at all times.