Ag is the 'big kid on the block'

Agriculture is the backbone of Adams County 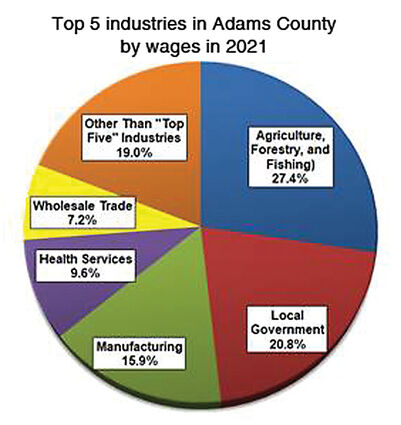 According to the report, dry-land wheat, potatoes and orchards account for most of the economy in the county. Several other industries, like French fry production, are also attributed to agriculture.

Because of that agricultural backbone, Adams County is poised for growth over the next seven years, the report shows, even if a recession hits.

“The agricultural side of the Adams County economy seemed to be relatively less affected by the pandemic,” the report said, noting that the county’s economy grew last year, buoyed by a 6.3% job growth in agriculture, fishing and hunting.

Outside of agriculture, the report said the overall economy has grown over the last year with the influx of coronavirus funding.

“However, it is uncertain how long this economic resurgence will last,” the report said, noting that the coronavirus funds are drying up, and interest rates are skyrocketing.

The state is predicting only a 0.1% job growth outside of agriculture here over the next seven years, the report said.

Still, from 2020 to 2021, an influx of new residents in the county has resulted in more people entering the workforce.

According to the report, at the end of June, there were 793 more residents in the county workforce than a year ago. But the number of adults in the workforce remains 226 fewer than in 2019 prior to the coronavirus shutdowns.

The report said agriculture accounted for 31.7% of the jobs in the county last year. Government jobs accounted for 17.7% and manufacturing 12.9%.

“The ‘big kid on the block’ in the Adams County economy is agriculture,” the report said.

Agriculture accounted for 1,769 new jobs being created over the last decade, the report said.

In addition, the county agriculture industry had the highest payroll in the county.

According to the report, the agriculture-related industries here had a payroll of $109,294,815 last year. That’s more than $26 million more than the second highest category – government jobs.

“The local agriculture industry provided over a quarter of the total covered payroll earned in 2021, ranking this industry as the top wage provider in Adams County,” the report said.

While agriculture is the leading economic industry in the county, residents overall are not doing as well individually.

In 1970, 79% of residents’ personal income was from working jobs, the report said. By 1990, wages from employment had dropped to about 65% of personal income.

In 2020, residents job-related wages only accounted for about 58% of their income, the report said, noting that 25% had come from “transfer” payments such as coronavirus-related government benefits.