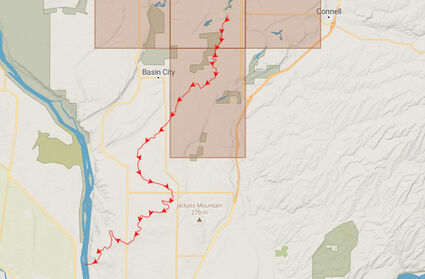 The redline shows the Potholes Canal route through Franklin County from Chance Lake to the Columbia River.

CONNELL – Farmers relying on the Potholes Canal for irrigation water can rest a little easier today after crews repaired a located and repaired a "significant" breach overnight Thursday night, July 7.

The canal starts at the outflow of Chance Lake, south of Bruce and west of Connell. It provides irrigation to farms in the Connell, Basin City, Eltopia and Merrill's Corner areas.

The breach was discovered Thursday morning, prompting the district to cut irrigation flows to prevent a complete failure.

"Staff discovered a significant leak at the north end of the Potholes Canal located in the Columbia National Wildlife refuge," officials said. "Because the leak threatened imminent canal failure, the decision was made to turn off water delivery."

The district dispatched crews to investigate and repair the leak. Crews worked "around the clock" to repair the canal. At the same time, district officials warned water-users of the shutdown of water flow and delivery. Water block Nos. 2, 3 and 18 were not affected.

By late Thursday night, the Potholes Canal breach had been repaired and irrigation water flow partially restored. The remainder of repairs were completed overnight, with full-flow resuming this morning.

"Deliveries will be made to waterusers as water is available throughout the district on Friday, July 8 and Saturday, July 9," officials said. "Waterusers should communicate with their respective ditchriders and watermasters to coordinate water deliveries."