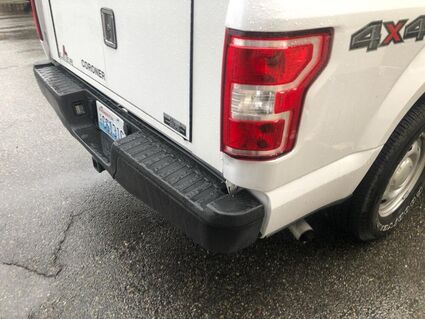 A golf ball-sized dent can be seen between the tail lights and the bumper.

By a 2-1 vote, commissioners approved covering the $5,600 repair of a small dent on a Franklin County Coroner's Office vehicle.

The vote came after a lengthy, interruption-filled presentation by County Auditor Matt Beaton.

According to Beaton, the small dent occurred last September when he backed his personal car into a haphazardly parked Coroner's Office vehicle in the Franklin County Courthouse parking lot.

The auditor recounted how Franklin County Shawn Sant had allegedly used his position to "influence" the process and have him Beaton personally billed.

"This is all over a bill that the prosecuting attorney and the staff had to go out of their way and around processes to make sure that a $5,600 bill was sent to my home," he said.

Beaton noted county agents (including employees, elected officials and volunteers) are "indemnified," or covered, while on the job.

It's no mistake that the issue is arising now, just before the 2022 election filing season opens, Beaton said.

He accused Sant of using his influence as county prosecuting attorney to "orchestrate and manipulate the county to waste money and go around normal practices, and worse to manipulate the actions of normal people, to get that mail in my mailbox."

Beaton rattled off several instances in which the prosecuting attorney allegedly influenced county issues over the years, issues that were the subject of investigations by auditors and others.

As he did so, Commissioner Peck's interruptions began.

Peck called for a point of order, claiming Beaton was "disparaging the prosecuting attorney."

When he continued talking, Chairman Didier called him out of order multiple times, banging he gavel on the desk.

With Peck at one time responding, "Put your gavel down."

"You are out of order; I am the chairman," Didier said. "Quiet."

When Beaton started to resume his explanation, Peck interrupted again, with Didier banging the gavel again.

"Mr. Peck you are disrupting this meeting," the chairman said. "Stop it. Stop it.

"Commissioner Peck will you quiet down. Let him present."

Beaton continued his outline on how the issue had been blown out of proportion just before election filing, noting he had spoke with public works and coroner staff about the process and needed repairs.

He also noted he was within the "scope of his work" at the time of the minor fender-bender of county property. And, as a result, the incident was covered.

Beaton noted the county has an established process for vehicle repairs. And in many cases, he said, the county declines to repair minor cosmetic dents.

He called the whole issue a "diversion," orchestrated at the beginning of the political filing season.

"This county, in its official capacity, advised me everything was fine (last fall)," Beaton said.

After his presentation, Sant took to the microphone briefly, saying:

"There's an awful lot of discussion I was not prepared for. I don't understand where all this animus is coming from."

McGary said he was aware of the incident and discussed repairs with public works, as well.

"I agree, that's a little dent," he said of Beaton's assessment of the damage. "I told them (public works) that we don't need to replace the bumper; it's fine."

But instead of letting the golf ball-sized dent go without repair, the vehicle was sent to A-Jack's Auto Services in Pasco, where the "whole side panel" was replaced, McGary said. "To me, that is ridiculous."

McGary said he was told the vehicle had to go out for repair because it is aluminum and the small dent couldn't just be pulled out.

" If you were willing to live with it, I don't know what we went through the trouble," Chairman Didier said in response to McGary.

Didier added, "I've been out to public works and I've seen some of those pickups. They've quite a few dents."

Didier said he didn't understand why the county "went to this extreme" to repair a small dent.

McGary said he dropped off the vehicle for repair in January "because I was told what to do."

"I'v been out to public works and I've seen some of those pickups. They've quite a few dents," Didier said. "I'm questioning why we went to this extreme when you were willing to live with it.

Commissioner Mullen said he had heard enough and just wanted to move on.

"I think we can all agree it's an accident," Mullen said. "It happened on courthouse property. The auditor was acting in fulfilling his obligation. I believe the auditor was working in good faith."

Mullen moved to have the $5,600 bill paid from the general fund and "move forward."

At that point, Commissioner Peck resumed interrupting the proceedings.

Didier gaveled him out of order again.

"Commissioner Peck, can you hold your tongue so I can conduct the meeting," he said.

"I think we need to hear from the prosecutor," Peck argued back.

"Why are you trying to disrupt this meeting," Didier asked rhetorically. "Will you please quit."

"The chair doesn't speak until other board members have," Peck argued back.

Mullen tried to halt the back-and-forth, saying it is in the best interest of the county to resolve the issue instead of continuing to argue.

"I believe Mr. Beaton is indemnified," he said.

Prosecuting attorney Sant stepped to the microphone for rebuttal of Beaton's presentation.

According to Sant, the incident happened when Beaton was leaving work, and therefore not covered.

He suggested the county offer Beaton a 50-50 settlement, as blame could be shared with the coroner employee who parked haphazardly.

"Legally, we can do that to resolve the dispute," Sant said, asking for a resolution to split the cost.

"Facts are stubborn things," Beaton said, noting had the normal process been followed the issue would've been resolved months ago without the brouhaha.

"This is political theater," he said, noting he's either covered or he's not.

Deputy Prosecuting Attorney Jennifer Johnson confirmed that under county ordinances, anyone acting "within the course and scope" of their job is covered, "even volunteers."

However, she cautioned commissioners not to refer to indemnification lightly.

Johnson said she discussed the incident with Beaton months ago, recalling he suggested he was off work at the time it happened.

"I do have a problem claiming he was on-duty after the fact," she said. "That's gong to haunt us many, many years to come."

Implying they are, is "incredibly dangerous," she said.

Beaton said he remembered the discussion differently, then pointed out that "public conversations on the public mic are always different than in person."

"Some of what's being said is slightly off," he said. "The Prosecuting Attorney's Office have been telling people not to talk to me. They have been influencing this process all along."

Beaton again called the process a distraction orchestrated through influence and politics.

With discussion ending, Commissioner Peck moved to amend Mullen's motion, and bill Beaton for 50% of the repair costs.

The motion was not seconded, leaving commissioners to vote on paying the repair cost from the general fund.