"This closure includes access to rock formation referred to as Castle Rock, the top of the main falls, access to the plunge pool and surrounding canyon walls," Parks Planner Laura Moxham said. "It also incorporates the existing signed area which some people have used to get down to the plunge pool."

The closure comes in the wake of four deaths over the last five years.

"Those areas have become areas of concern because visitors have been using them to access the waterfall," she said. "The closures will allow staff to address trespass, vandalism and resource damage issues." 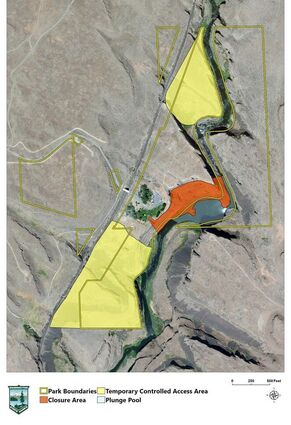 The graphic shows the areas being closed to hiking at Palouse Falls State Park near Washtucna.

Area Manager Audra Sims hopes the proposed closures will stop the graffiti, too.

Commissioner Ken Bounds questioned the temporary closures timeline and asked if "staff have a plan of action and know how long the closure will be?"

"We don't have a specific timeline because we are still working on partnerships with the railroad, the Department of Natural Resources and the Department of Fish and Wildlife," Park Planner Melinda Posner replied.

Bounds also questioned the future use of the permanent closure area, asking if there would be any possibility of guided hikes or tours in the future.

"I would not suggest guided hikes in the permanent closure area," Moxham said. "Safety concerns are too high as far as hiking to the rock. But it is possible in the temporary closure areas."