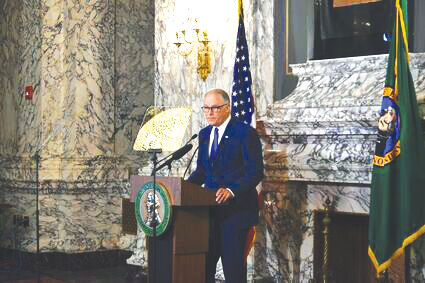 Photo courtesy of the Governor's Office

Gov. Jay Inslee delivers his annual State of the State address in the state Capitol.

OLYMPIA – Immediate action must be taken to address climate change, the housing crisis, transportation, and education, Gov. Jay Inslee said in his annual State of the State address Jan. 11.

"We face a variety and dimension of demands greater than ever as we enter 2022," he said. "We must take action this day to keep and strengthen our commitments to those in need right now and in the future."

"When I look into the eyes of people who have lost their home and see the pain they have, that's the pain of climate change," he said. "We have to do everything we can to fight it."

Inslee proposed spending nearly $800 million to address economic disparities and the affordable housing crisis. He emphasized the need for an increased access to safe housing for homeless individuals and the removal of legal barriers currently obstructing the construction of higher-density dwellings such as duplexes and townhomes.

"If our children and grandchildren are ever going to afford a rent or mortgage, we need more affordable housing," he said.

"Just buying food, or gas, or housing, or heating your house has become difficult for many," he said. "We need to do things within our state to drive those costs down."

Addressing constituents virtually, Rep. Chris Gildon, R-Puyallup, called for tax breaks for Washington residents and an end to restrictions imposed by the governor.

"After almost 700 days of emergency rule, it's apparent that many people across our state feel that our system of government has betrayed them," he said. "That their voices no longer matter."

Gildon argued for the passage of HB 1772 which would give the Legislature the power to terminate a long-term state of emergency.

In addition, Gildon advocated for eliminating the long-term care payroll tax as well as the business and occupation tax on manufacturing, a position echoed by Sen. Judy Warnick, R-Moses Lake.

"If we cannot do something for the manufacturers, the job creators in the state of Washington," Warnick said, "then we're failing not only those businesses, but failing those people who work for them."