Most area school districts not affected by order 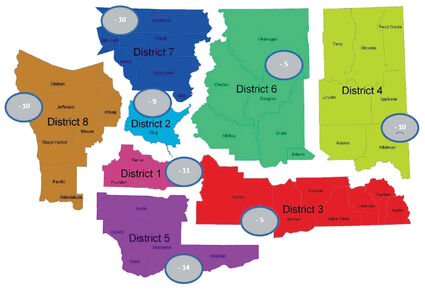 On Tuesday, the Washington State Patrol was among the first to paint a picture on the separations and terminations stemming from the gubernatorial proclamation requiring all state, education and health care workers to be “fully vaccinated” against the coronavirus, be approved for an exemption or be fired.

A total of 127 employees – including 74 troopers – “have separated from employment,” according to the patrol. The troopers include 67 road officers, six sergeants and a captain.

The number includes 10 troopers from its District No. 4, which stretches from just north of Connell to the Canadian border, including Adams Ferry, Lincoln Stevens, Pend Oreille, Spokane and Whitman counties.

“We’ll miss every one of them,” patrol Chief John R. Batiste said. “I extend a hardy thanks to those who are leaving the agency. I truly wish that you were staying with us.”

Officials did not break down the number of employees and troopers fired for refusing the vaccine, who resigned or those who requested an exemption but could not be reassigned.

“We’ll miss every one of them,” patrol Chief John R. Batiste said. “I extend a hardy thanks to those who are leaving the agency. I truly wish that you were staying with us.”

The patrol did not break down where the 53 support staff positions were left vacant.

Batiste didn’t dwell on the loss of officers, instead he said the agency must move on.

“We must now turn our attention to making sure we deploy our resources in a manner that continues to keep our roadways safe and meets the other core law enforcement responsibilities,” he said.

Spokane County Fire District No. 3, which generally covers the southern part of the county, also had some impact due to the mandate.

But Fire Chief Cody Rohrbach said the agency was able to accommodate 100% of district personnel, noting that some adjustments were made.

Those adjustments meant changing the status of some firefighter-EMTs to fire responders only, so those objecting to the vaccine mandate would remain on the department without being called upon to provide medical assistance.

While the patrol was reporting a large staffing loss and the fire district successful vaccine accommodations, the Liberty and Medical Lake school districts reported business looks like it will continue as usual.

According to Medical Lake Superintendent Timothy “Tim” Ames, there were zero resignations or terminations.

Ames said the district granted 37 exemptions to employees who declined to get an experimental vaccination, and possibly booster shots.

Zero employees were reassigned, he said.

According to Ames, the employees who received exemptions agreed to weekly tests and wearing protective masks, such as the KN95, multi-layer surgical mask.

In nearby Spangle, the Liberty School District lost one employee, but officials declined to say if they were fired or resigned.

Upper Columbia Academy, which is also in Spangle, didn’t see any impact. The private school didn’t have any terminations or resignations, officials said.

The Reardan-Edwall School District which spans the area along the Spokane-Lincoln County line, also reported there were no terminations or resignations. They did not elaborate on the number of exemptions requested.

Cheney School District officials were not prepared to provide numbers related to the mandate at press time Tuesday.

“I’ll reach out to our HR team to see if data is final and get it to you as soon as we are confident it is accurate,” Superintendent Robert “Rob” Roettger said in an email.