Meeting on proposal set for Oct. 5 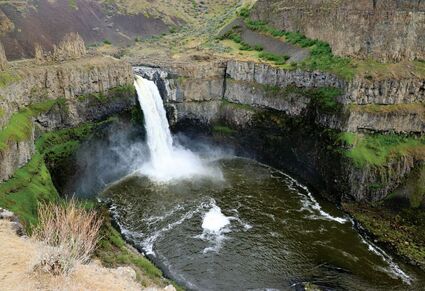 Washington State Parks officials are proposing new rules for Palouse Falls that include requiring a permit to hike and elimination of the campground.

OLYMPIA – A new plan for managing Palouse Falls State Park may end camping and require hiking permits if its approved.

Washington State Parks officials will take comments on the plan during a virtual 6 p.m. meeting Oct. 5. The meeting will be accessible online at https://bit.ly/3tYuVAo.

According to State Parks' Lauran Moxham, the meeting will also include discussions of agency-planned changes for Lyons Ferry and the Lewis and Clark trail State parks

Under the proposal for Palouse Falls, camping would he eliminated "to provide park visitors with a day-use experience that encapsulates the awe-inspiring power and beauty of the falls ..."

The plan also calls for reining in visitors who hike to Upper Palouse Falls and to the basin of the falls, noting there will be "no off-trail use."

"Visitors will be asked to get a permit in advance of their arrival," according to the plan, which also notes there would be "limited public access by trails, where appropriate."

Moxham said such a permit system would help people "be informed" before heading to Palouse Falls.

At this time, the proposal does not include a limit on how many visitors or hikers would be allowed.

"It provides that extra safety message the people woul dhave to read through to apply for that permit," she said. "It's not really limiting number, per se."

According to Moxham, the new restrictions are necessary because "it's a remote park."

She also said new rules are necessary due to safety issues, graffiti and primitive camping alongside Upper Palouse Falls.

"Folks have been camping at the upper falls, where they shouldn't be camping," she said. "Overnight camping has been an issue with it being so remote."

Many kayakers also use that stretch of river, but Moxham said kayaking wasn't a consideration in development of the proposal.

Along with restricting public access and use, the plan calls for designating the main part of the park as a "heritage" area at the Yakama Nation, the Confederate Tribes of the Colville Reservation and the Nez Perce and Umatilla (Ore.) tribes.

When asked why the Yakama, Colville and Umatillas were involved in planning for parks not in the areas of their reservations, Moxham said state officials followed a model other government agencies were using that included those tribes.

"We have been working with those tribes for many years," she said, noting they claim it as a "cultural resource."

Parks officials also have their eye on surrounding private land with a goal of expanding the park boundary in the future.

Lyons Ferry would remain virtually the same, except for development of a full-service campground.

Across the Snake River along the Lewis and Clark Trail, officials want to expand the state park area for camping and day-use activities, and allow non-motorized access to the river.

Moxham said the changes would provide a better recreational experience for visitors and reduce the risk of overcrowding at each of the three parks. 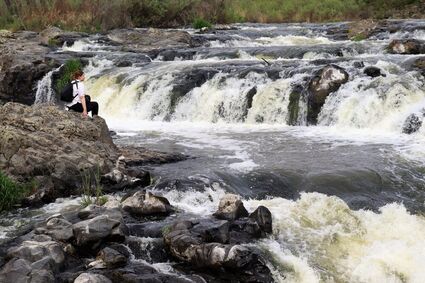 Upper Palouse Falls would only be accessible after obtaining a permit, if the new rules are approved. Pictured, a hiker sits on the edge of the upper falls.

Parks officials are hoping to have a large local turnout for the virtual meeting – the largest session before the coronavirus shutdowns more than 19 months ago, attracted 30 people.

"Our plan for the meeting is to present information ... and get feedback from the public," she said, noting the plans are "not set in stone."

Several years ago, the park installed fences around the visitor area, blocked trails and attempted to keep hikers and others from reaching the upper falls or the bottom of the basin.

That effort was met with a public outcry and the fences were removed.

In their place, warning signs were posted along the rim of the main falls, as well as along established trails to the upper falls area.

"I definitely encourage them (local residents) to participate if they can," Moxham said.