Be proud you're American 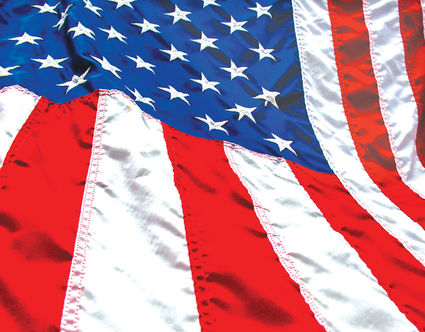 And on this 245th birthday of our United States, it's important to take time to remember why we mark July 4.

Sure we celebrate the holiday with barbecues and fireworks, parades and apple pie. But that's not what it is about. Independence Day is about freedom from tyranny. It's about being able to own property, speak your mind, worship how you want, gather together, be protected from government corruption and overreach and, when necessary, defend yourself not just from others, but also from government.

"When in the course of human events, it becomes necessary for one people to dissolve the political bands which have connected them with another, and to assume among the powers of the earth, the separate and equal station to which the Laws of Nature and of Nature's God entitle them, a decent respect to the opinions of mankind requires that they should declare the causes which impel them to the separation."

With that clause, the 56 men who signed the Declaration of Independence knew they were signing their own arrest warrants, maybe even death warrants. Seventeen would later serve in the military during the American Revolution, five would be captured. Eleven had their homes and properties destroyed by the British. Some lost their lives and others' loved ones were killed or captured.

Still, they persevered, launching the greatest nation the world has ever known.

That's what Independence Day is about – remembering, honoring, and remaining vigilant.

But this year's observance comes with stepped-up attacks on our Constitution, our traditions, and our way of life.

Fringe groups would have you believe our independence should be traced to 1619 or that our country is systemically racist.

Politicos and their non-elected cohorts have tried to lock you in your home for the better part of the last 18 months, essentially stripping you of your rights to assembly, free speech, religion, and representation in the name of "safety." They have ordered you to wear a mask and have pulled out all the stops to "encourage" everyone to accept an experimental vaccine, again in the name of safety.

Big tech blocked your access to the free flow of information and ideas. You can only read what they want you to read. You can only watch what they approve. Through censorship, big tech companies have made themselves the arbiters of what you should believe.

The Declaration of Independence is a great place to start. Read it, discuss it, and understand it.

Then don your best red, white and blues. Take in a community festival. Grill those hotdogs, have some apple pie and proudly fly "Old Glory." If you celebrate with fireworks, do so responsibly.

You're American. Be proud of it. Show it.

And have a safe and happy Independence Day.

— Roger Harnack is the co-owner and publisher of Free Press Publishing. Email him at [email protected]