Still no fans allowed at Saturday's rematch at Roos Field 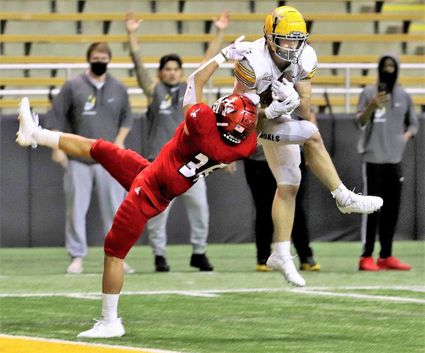 Idaho's Hayden Hatten hauls in a 25-yard pass to give the Vandals a 28-21 victory over the Eastern Eagles on Feb. 27. The Eagles' Keshaun King of Marysville was the defender on the touchdown play.

This time around, it might be the wind – not a piece of scoreboard that affects field goals – when Eastern and Idaho meet in the Big Sky season finale.

And, in this second-go with the Vandals coming to Roos Field on Saturday, April 10, Eastern Coach Aaron Best will be live on the sidelines, not tucked away due to COVID-19 protocols.

Two days prior to their first gridiron grudge match, Eastern confirmed Best had tested positive for coronavirus and would miss the season-opening game.

He came out of isolation March 6 to coach against Northern Arizona.

"We're playing a team we haven't beaten in a while," Best said. "It will be fun and new for me – I didn't get to be there the first time in the Kibbie Dome. But I do know this, we are going back home and we love to play on the Red."

With four consecutive victories after being stung 28-21 in that Feb. 27 contest in the Kibbie Dome, Eastern (4-1) is likely a win away from qualifying for the playoffs. The Vandal victory was their second in a row dating back to 2019.

But the Vandals would take their only lead of the game with 54 seconds left and won by a touchdown.

The game featured a whacky sequence of events where a Seth Harrison field goal in the fourth quarter cleared the uprights but bounced back onto the field after striking support structure for the scoreboard.

Officials ruled the field goal no good, but after further review the Big Sky overruled the officials' call – too little, too late.

At this time, tickets are not being made available to the general public, although Eastern is allowed an attendance of up to 25% capacity of the stadium.

In addition, Eastern parking lots will continue to be closed to the general public and no pre-game tailgating or overnight parking will be allowed.

Eastern will try to continue a pair of home winning streaks this week. The Eagles have won their last 16 homes games at "The Inferno" and All-America quarterback Eric Barriere is a perfect 12-0 as a starter there.