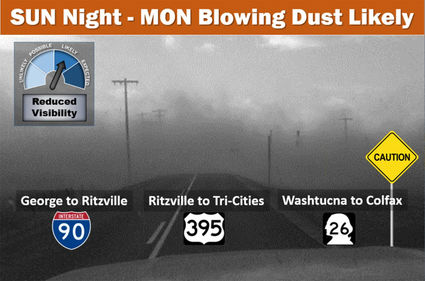 SPOKANE — National Weather Service officials are tracking a powerful cold front that will be passing through the region this weekend, bringing with it the potential for very strong winds on Sunday into Monday that could create blowing dust conditions and damage from downed trees and power lines.

Projections at a Friday press briefing are for winds increasing throughout the day on Sunday. Peak speeds reaching 45-40 miles per hour in the Columbia Basin and Spokane regions and 50-55 mph in the Palouse are expected from 5 p.m. through midnight, with gusts achieving higher speeds.

The winds should taper off into Monday, with gusts from 40-50 mph possible during the morning and 30-40 mph in the afternoon. While powerful, forecasters at this time don’t foresee wind speeds seen in a storm that heavily impacted the region Jan. 13 or in November 2015, causing widespread power outages and damage.

NWS forecaster Andy Brown said during the January storm, their station near Spokane International Airport recorded a gust of 71 mph.

“We are not thinking it’s going to be that strong,” he added. 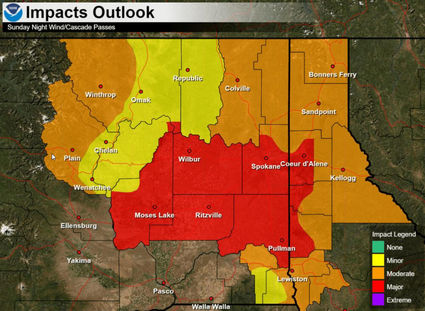 Officials are particularly concerned with blowing dust, especially in the Basin and Palouse where farmers have begun tilling their fields in preparation for spring planting. Confidence is high, therefore, in blowing dust but more uncertain if this will occur near roadways, which could lead to widespread reduced visibility of around three miles and localized visibility of about a mile.

It’s of particular concern, officials said, because the strongest part of the storm will be occurring during a period of already reduced visibility — night.

While blowing dust is a concern in the Basin and Palouse, the worry in Spokane and the eastern portion of the Palouse/Whitman county is for downed trees and power lines. And while forecasters are uncertain of top wind speeds, they are fairly confident the storm won’t be weaker than predicted.