Tri-Cities area to remain in Phase 1

Scheduled football, volleyball and girls soccer games may be delayed 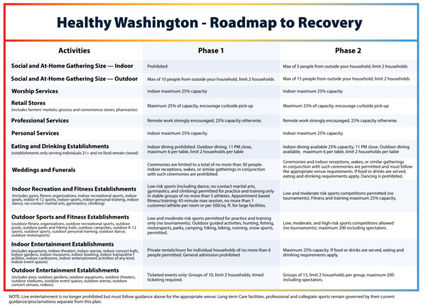 PASCO — Franklin County and the greater Tri-Cities area will not be allowed to move to the so-called "Phase 2" next week.

That's the word from Gov. Jay Inslee during a press conference minutes ago, Thursday, Feb. 11.

The governor announced that all of his so-called regions, except the "South-Central" region, will be allowed to move forward due to reductions in coronavirus risk.

The only counties remaining in Phase 1 are in the so-called "South-Central Region," which includes Columbia, Walla Walla, Benton, Franklin, Yakima and Kittitas counties.

The rest of the state is alllowed to move to Phase 2 on Sunday, Feb. 14, in time for restaurants, bars, taverns and theaters to open for Valentine's Day. Moving to Phase 2 means football and volleyball games can begin in local schools, and restaurants, bars, taverns, gymnasiums and theaters will be able to reopen indoor service in a limited capacity.

Remaining in Phase 1 means football, volleyball and girls soccer may not be allowed to proceed as scheduled. Further, restaurants, bars, gymnasiums and theaters are generally still prohibited from offering indoor service.

The governor's press conference was ongoing as this story was posted.