von Oelhoffen ready to take the court for Beavers 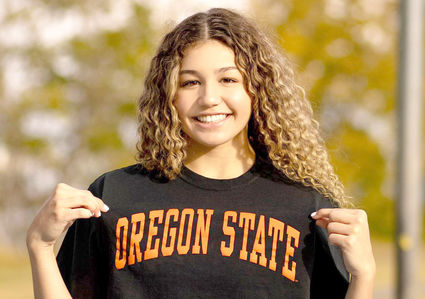 Chiawana guard Talia vonOelhoffen has graduated early so she could play for the Oregon State University women's basketball team.

CORVALLIS, Ore. – Oregon State University has signed a high school girls basketball player to its roster for this spring.

Talia von Oelhoffen, a 5-foot-11 guard, will graduate early from Chiawana High School in Pasco to begin her college career for the Beavers, head coach Scott Rueck said Friday. She has already enrolled in classes at the university.

von Oelhoffen signed a letter of intent with the Beavers in November.

"Talia is a very special person and player, and we are all excited to welcome her to campus," the coach said.

According to the university, von Oelhoffen will be eligible to practice with Beavers as soon as she completes health requirements. She may even be able to play games by Jan. 29.

"We have been looking forward to having her here since she committed to Oregon State, and now we are happy she will be joining us about five months earlier than we had originally planned," Rueck said. "As the prospect of a high school basketball season dimmed for von Oelhoffen, the opportunity to grow and develop alongside her teammates at the next level became increasingly appealing."

She was named to the Naismith Trophy Midseason Top-25 this season, is a five-star recruit, and checked in as Collegiate Girls Basketball Report's No. 14 rated player in the nation, the university said. She is also a three-time Adidas All-American, and was named conference Player of the Year on three occasions.

von Oelhoffen earned Washington 2B Player of the Year honors, and helped her team win a state title in the 2018-19 campaign.

She earned Washington 4A All-State honors and was the Adidas Gauntlet leading scorer in 2019.

von Oelhoffen helped her team reach the Adidas National Championship Finals three times, and was the 1v1 champion at both the Wooten Top 150 Camp and the Adidas All-American Camp.