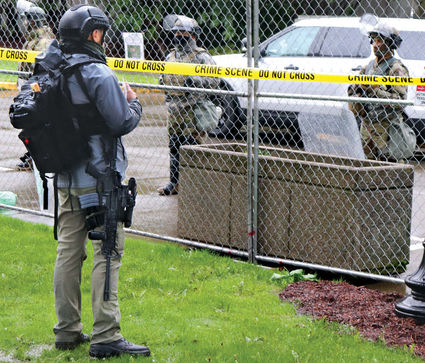 Early in the morning, a woman parked her RV in front of one of the gates and refused to move it or leave, the Washington State Patrol reported. When she was arrested for failing to follow a lawful order, one of her friends moved the RV.

Then at precisely 11 a.m. as the Legislature was opening session, a man in his 30s attempted to walk to the Capitol building and was immediately arrested for failing to follow a lawful order, the patrol said.

The patrol has yet to release the names of the two arrestees, their ages or hometowns.

Those two incidents capped a rather uneventful opening day for a legislative session.

At the peak, about 75 people were protesting near the main gate as guardsmen perched on surrounding rooftops monitored activities.

A few carried tactical rifles, one carried a shotgun and one a sword. While they yelled at the guardsmen and troopers guarding the entrance, they did not advance on the detail called in by Gov. Jay Inslee. A few crossed a yellow "crime scene" tape, but retreated before reaching fencing that had been set up to cordon off the Capitol, the John A. Cherberg, the John L. O'Brien and the Joel Pritchard buildings, as well as the Hall of Justice and the Governor's Mansion.

Gov. Inslee made a brief appearance about 8 a.m., walking inside the perimeter thanking guardsmen - armed with clubs and shields - for protecting him, lawmakers and others working inside the cordoned area, an area that is normally open to the public, even during legislative sessions. 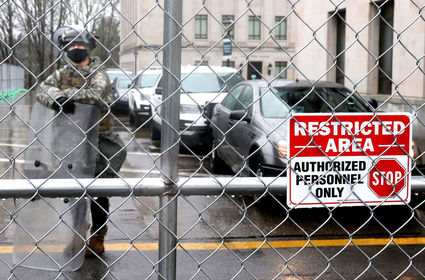 A persistent, rain fell throughout the day, which may have helped keep people away from the opening of the session.

As only a few turned out to a campus that traditionally have thousands of people on opening day, the federal government was warning all state's that an "uprising" has been called by online groups unhappy with the election results, the coronavirus quarantines, alleged racism and more.

According to the FBI, massive protests are expected between now and inauguration day, Jan. 20.

Many protesters are expected to be armed.

Back in Olympia, the state patrol said about 750 Washington National Guardsmen had joined troopers in the Capitol this weekend.

Guardsmen will stay as long as necessary, the patrol said.