More than 250 rally to reopen Tri-Cities 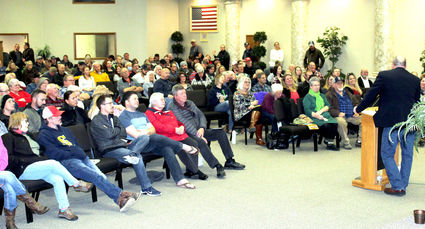 RICHLAND — More than 250 people turned out Sunday afternoon to rally in support of opening all businesses statewide immediately.

Participants weren't just from the Tri-Cities.

When emcee Donnie Landsman asked where people came from, he received answers of Wenatchee, Royal City, Vancouver, Tacoma, Yakima and elsewhere, as well as the Tri-Cities.

All had come to listen to a lineup of speakers who vowed to keep the economy open, among them were businessman and Benton County Commissioner-elect Will McKay, Pasco City Councilman and attorney Pete Serrano, Franklin County Sheriff Jim Raymond, Benton County Sheriff Jerry Hatcher, Koko's Bartini owner Dana Slovak, Rep. Brad Klippert and others.

The event also included a digital session speakers from across the country recounting problems with their local officials as well as airlines.

The Constitutional Law Group's Donna Rex got the group fired up first.

"We are on the precipice of losing the greatest nation ever," she said, calling lockdowns here and elsewhere constitutional violations endangering the nation.

Rex called on participants to stand up together, open businesses together and defend each other from overreaching state and federal agencies, airlines and others.

"There is power in numbers," she said. "It's time we take action. This betrayal is nothing less than treason."

According to Rex, elected officials all take an oath of office requiring them to uphold the constitution. And assisting in the effort to shutter businesses is a violation of that oath.

Rex and partner Rick Martin are suing Spirit Airlines for violating its own policies and kicking them off a flight because they talked with other passengers about their efforts to reopen and unmask society.

Landsman picked up briefly where Rex left off before introducing the next speaker, Robyn Openshaw, who also talked about her recent airline experience aboard a Delta flight.

"We're not in a free market anymore," she said, noting airlines are turning passengers into angry mobs anytime someone voices frustration or questions mask requirements.

Martin, too spoke about his airline experience, but refocused the program on unconstitutional mandates.

Government works for the people

"We have to start taking back our government and put fear aside," he said, reminding the crowd that government employees work for the people, not the other way around.

Landsman took back the mantle and quickly addressed the activities of Labor and Industries and Liquor and Cannabis Board agents overstepping their authority.

"Our governor has agents doing his business," he said, referring several months of businesses reportedly shutting down due to threats from government employees.

L&I agents only have authority when it involves employees; liquor and cannabis agents authority ends with those substances.

But agents from both agencies have been reportedly using a catch-all in Washington Administrative Code they say gives them authority over all health-related issues in a licensed business.

That's not accurate, Slovak said, taking to the microphone next.

Slovak has faced threats from state agencies for keeping his West 27th Place restaurant and martini bar open in Kennewick.

He's since hired legal counsel and has appealed at least one citation.

Slovak recounted harassment in which L&I agents called his chef to demand the business close, he said, telling other business owners not to be afraid.

"They're men and women, just like us," he said. "Only they're trying to shove something down my throat."

Floyd said he initially went to take-out service on food, but then patrons asked to stay for a beer. Then they asked if they could eat their take-out order inside.

He decided not to turn patrons away and opened up his 3320 W. Kennewick Ave., Kennewick, pub.

Even open, Floyd said he's lucky to break even these days with government and media trying to scare everyone.

That anger has boiled over in several areas of the state.

In Mossyrock, the City Council passed a resolution stating there is no emergency in that community and has since reopened for business.

Serrano pointed that out when it was his turn at the mic.

Serrano has been trying to get his city to follow suit.

"But I'm in the minority on this issue," he said, noting other council members are afraid of bucking the governor's orders. "If a business wants to reopen and they want to take the risk, I don't see a problem."

Serrano believes the decision to shut down should rest with local jurisdictions, calling on Eastern Washington towns and cities to "whittle away" at the governor's order.

According to Serrano, the governor's authority is limited under the same law Gov. Inslee is claiming gives him authority.

Revised Code of Washington 43.06.220 (2)(g) says the governor is prohibited from any action that infringes on the First Amendment, including the right to free speech and assembly.

Sheriffs Hatcher and Raymond spoke next, telling rally-goers they will not be shutting down any businesses.

"Me and Jim, we work for you," Hatcher said. "We represent the people."

Hatcher took a jab at the governor and the city of Seattle, noting "you will never see a sheriff giving up six blocks," a reference to the so-called "Capital Hill Autonomous Zone" where Black Lives Matter and Antifa supports chased police out and others out of the area, barricaded roads and destroyed businesses and vehicles.

Hatcher said sheriffs are beholden to the public and will help out in accordance with his oath of office.

"We can't have someone in Olympia targeting certain businesses," he said.

Raymond spoke along the same lines.

Raymond told the crowd it "makes me proud to be American" seeing the turnout and support.

"Whatever you do, do not give up your God-given rights," he said. "All laws that are repugnant to the Constitution are null and void."

Rep. Klippert spoke briefly too about the statute giving the governor his authority.

According to Klippert, it was never meant for a situation like a pandemic. The RCW was written to provide a means to help manage the chaos that would follow an eruption of a catastrophe like Mount Rainier erupting or a sustained Cascadia Subduction Zone earthquake. 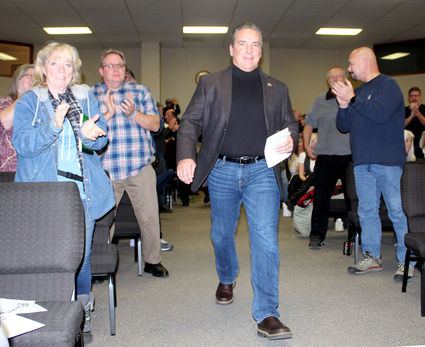 Benton County Sheriff Jerry Hatcher gets a standing ovation as he walks to the podium to voice his support of businesses wanting to open up in protest of Gov. Jay Inslee's quarantine orders.

When it was his turn to speak, McKay said he was glad to have the support of the sheriff.

"We need to stand up as a country," he said.

McKay, who ran for office on an "open Washington" platform, said businesses need to open together.

Otherwise, he compared individual reopenings to government agencies playing a whack-a-mole game - meaning as soon as a business owner opens and sticks his head up, the agent whacks them, sending them back underground.

McKay made his presentation wearing a baseball hat that said "Lion Not Sheep."

He closed by telling business owners and residents to be the lions in the reopening fight, rather than sheep hunted by government bureaucrats.

"Get together and decide you are opening," he said.

I wish I had known about this rally. I am a retired engineer and incident investigator and spent the last 9 months studying COVID-19 and our government has done a horrible job. We need to take our liberty back now! For all businesses out there, go to www.fact-checked.org and download, print and handout a professionally made COVID-19 Facts Flyer. https://fact-checked.org/products/

This lists all the irresponsible business owners I intend to never frequent again. Pure selfishness, has nothing to do with freedom. Only interested in themselves. True freedom comes with responsibility. The fact they gave Hatcher who is facing a recall effort for his own criminal activities, a standing ovation says much about the credibility of the entire group. Hopefully when Trump is gone for a while these nut jobs will crawl back under the rocks they came out from.