PASCO - You could say he was preaching to the choir.

Patriot Prayer front man Joey Gibson of Vancouver provided the keynote address at a two-hour-long protest that attracted more than 150 people Tuesday morning, Nov. 24, to the steps of the Franklin County Courthouse.

The crowd waved flags, carried signs and called on local officials to do their part to keep local businesses open and oppose unconstitutional coronavirus mandates being issued by Gov. Jay Inslee.

An adjacent digital road sign displayed "open up" and motorists honked as they drove by.

Deputies stood by to make sure things didn't get out of control.

The rally came after the governor issued a four-week shutdown of indoor dining and bar services, gyms, entertainment venues among other restrictions. The order expires Dec. 14, the day the Electoral College votes for the next president of the U.S.

Several local business owners and others took to the courthouse steps to voice their displeasure with shutdowns and suggestions from the governor and paid health advisers that families shouldn't gather for Thanksgiving.

The protest kicked off with John Logue of Mesa taking to the steps first.

An organizer and member of Benton/Franklin Let us Work, Logue said area residents are tired of businesses being closed while government employees continue to get paid, even when they don't show up for work.

Logue continued as the emcee.

Gibson offered a fiery call to arms, urging protesters to take control of their lives back from politicians and non-elected bureaucrats. He also called on protesters to support local business owners' efforts to stay open in defiance of quarantine mandates.

Gibson questioned why Americans would cede their businesses to state and local agencies.

"We put in our own money. We take the risk. We put in all the work," he said. "This state has nothing to do with it. We no longer need business licenses."

He said that if a state agency tries to shut down businesses refusing to follow coronavirus mandates, thousands of Washingtonians will rally on their behalf.

"Stay open, no matter what," he said, acknowledging the efforts of Koko's owner Slovak. "If they pull his license and he stays open, people will mobilize all over the state of Washington and we will be here in front of his business. Thousands of us will be here."

"He wants to save his job, but destroy everybody else's," he said, adding that it shouldn't be about self-preservation.

If government agencies are allowed to fine and shutdown businesses, soon there won't be any businesses left, he said.

On Sunday night, Gibson led a protest in front of Shively's house in Kennewick.

Gibson cautioned protestors and business owners about efforts to slip under the radar.

"Inslee knows everything we're doing when we defy his orders," he said.

According to Gibson, the political elite here and elsewhere is worried that Americans are waking up, pushing back and "finally saying this is our country. It is that fire that they are afraid of, that fire and that passion."

Gibson called on the public to stand up against increasing government tyranny, here and abroad.

"It is time that we stand up, that we fight. Standup and speak the truth, unapologetically."

Before and after Gibson, speaker after speaker called for restaurants and bars to open up. They also called on local elected public servants and their hired employees to stand up for local businesses and reject Gov. Inslee's mandates.

"A year ago, would you have thought we'd all be walking around in face masks and be unable to run our own businesses," Hatch asked the crowd. "It's craze. This is not what our forefathers fought for.

"Pilgrims fought for freedom of religions; now, we can't even go to church."

Hatch said the governor and non-elected bureaucrats are treating Americans like children and making decisions citizens should make for themselves.

"They are locking up all the healthy to protect the weak, instead of saying to the weak, 'Stay home and regulate yourselves,'" she said. "We need our freedoms."

She chastised elected legislators who passed a law that essentially paved the way for the governor to strip citizens of their constitutional rights.

"We need to tell the Legislature that they had no authority to vote away our constitutional rights," she said. "They handed them to an idiot king who can't even find his own cotton swabs."

Hatch called on the crowd to tell politicians "no freedom, no peace," a chant that the crowd adopted periodically throughout the protest.

Commissioner Didier agreed, calling on protesters to contact their representatives.

"Right now, government is picking winners and losers," he said, noting big businesses have been selected to be the winners while small businesses are the losers.

Didier reminded residents of the governor's argument in a lawsuit he, Hatch and others filed against the governor.

In that lawsuit, U.S. District Court Judge Benjamin Settle ruled the governor couldn't be sued because he couldn't enforce his own coronavirus mandates.

"If he cannot enforce his proclamations, why are we adhering," Didier said, urging protesters to keep "doing what you're doing."

Mullen picked up on the theme, encouraging protesters to "stand up for what is right."

As a business owner, Mullen said he, too, has felt the "strong arm of L&I" in the past.

Labor and Industries has levied multiple fines on businesses disobeying the governor's coronavirus edicts, he said.

"We need to find a way legally to challenge what is being put down on us," he said. "If we simply open the county, I don't believe the county commissioners can do anything to protect you from L&I or the Liquor Control Board (now the Liquor and Cannabis Board) and their outrageous fines."

Slovak vowed to stay open, "no matter what."

He suggested business owners "throw them out" if state Liquor and Cannabis Board or Labor and Industries employees show up.

Slovak said he shut down his upscale bar and eatery in downtown Kennewick for the first go-around last March.

But this time around, he said he's staying open.

"My chef and my crew said let's fight this time," he said, noting he's being represented by the Celski Law Firm in his efforts to remain open.

Slovak recalled an instance when a state employee came in to try to shut him down.

"His hands were shaking," Slovak said, pointing out he had "supporters behind me."

Since then, Slovak has been cited by the liquor board, he said.

Emotional commissioner-elect McKay, too, said he's been effected by the governor's orders.

He likened the shutdown to the 9/11 attack on the World Trade Center.

"Ladies and gentlemen, our first tower fell when we lost the constitutional right to even go to church this year," he said, tearing up. "We cannot let our second tower fall."

That second tower, he said, includes the nuclear family and love.

Some of the speakers addressed other issues arising from the quarantine, including schools and the mental health of children.

Ted Robbins of Richland talked about his son Christian, who committed suicide April 26 at 16 years old.

"He wrote to us in his letters that the COVID lockdown was the last kink in his armor," Robbins said. "You cannot silo our kids and not expect there to be problems."

Robbins said the closure of schools and churches is having a severe detrimental effect on all youth.

"Our local officials are just not looking after our children at all. We need to do something about it."

For his part, Robbins said you'll see him and his family advocating and picketing on street corners in the area.

"We're speaking up for all the kids that are sitting at home," he said.

"This is not OK," teacher Tara Childs said when it was her turn to speak. "What is going on is not OK with me; it should not be OK with you."

Childs said the lockdowns are having a detrimental impact on education and growth of children.

She said she was particularly upset by how students are being treated today, both on campus and in digital classrooms.

The novelty of digital studies has worn off and students are disengaged, she said. She also noted that teachers now are even using the digital platform to censor students with opinions they don't agree with.

Those students lucky enough to go to school in-person, she said, are being treated like they're in the Army, rather than an educational center. 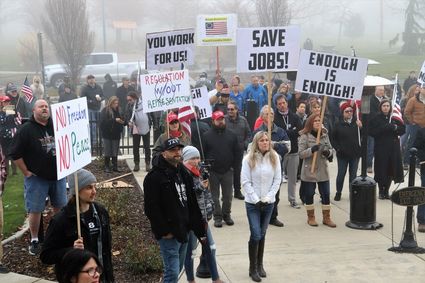 "They line up like they're in the army. They are 6 feet apart, masked," she said. "They have to get their temperatures taken and they are told, 'Good boy, Johnny for wearing a mask.

Childs said school shutdowns have "halted the ability for kids to grow as humans by not allowing them to interact."

She called on protesters and others to rise up and challenge school shut downs, too.

"I've never seen so many kids at risk and this is not OK," she said. "We have been complacent. We've been censored and we've been divided.

"It's time to step up and take action."