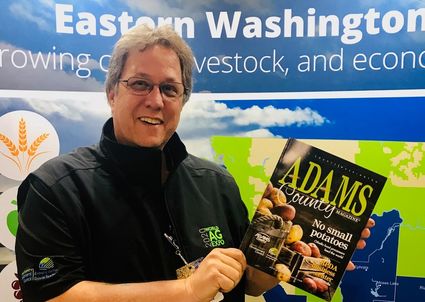 Stephen McFadden transitions as the director of economic development for the Port of Adams County to the Port of Pasco on Nov. 2.

PASCO – New jobs and new companies is the intention of the Port of Pasco in hiring a new economic development and marketing director.

Stephen McFadden replaces Gary Ballew at the Port of Pasco as the director after Ballew took a new job as vice president for economic development for Greater Spokane Incorporated business group.

"I am excited to join the Port of Pasco team. The Port's development areas are diverse and evolving in a region that has seen incredible growth. The Tri-Cities Airport, Osprey Pointe, and the Reimann Industrial Center are all excellent opportunities to attract new employers, private investment, and a variety of great new jobs," stated McFadden.

McFadden is credited with creating and implementing economic development plans bringing an "enormous amount of business and industry to Adams County" during his six years as director.

"I am grateful for the faith the Adams County commissioners invested in me. We've enjoyed several great successes thanks to the partnerships we have established with the cities, towns, and community leaders," he stated.

He has been working in central Washington for the last decade working as the former publisher and owner of the Ritzville Adams County Journal, chairman of Big Bend Community College Board of Trustees, among 0ther positions for various boards and committees.

"The Port of Pasco is fortunate to welcome an individual of Stephen's caliber to the area. As a near county-wide Port district, Stephen's proven track record of building partnerships and successful economic development will benefit not only the Port but the many agencies and businesses located in Franklin County," stated Randy Hayden, the port executive director.