Harvest increases by 60,000 acres this year 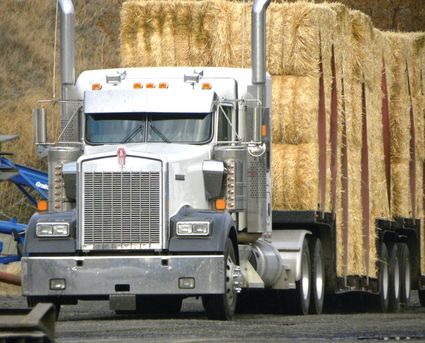 A straw truck pulls off Highway 26 for a break Tuesday at the edge of Colfax.

COLFAX - Have you noticed the amount of hay trucks on Whitman County highways late this summer and fall?

The harvested area for hay is up by 60,000 acres in Washington since 2019, according to the Oct. 1 statewide crop production report from the USDA National Statistics Service. It means more trucks shipping the harvest.

Reasons why are connected to potatoes and the timing of rain.

In a normal year, about 160,000 acres of potatoes are planted statewide. In 2020, the number is down by 20,000, with many acres shifted to other, late-planting crops after the virus shutdowns in March.

"Processors backed off of their contractual obligations with growers," said Matt Harris, director of governmental affairs for the Washington Potato Commission. "All of a sudden you were told, 'hold on a minute on that next circle.' If it's so late in April, what can you plant, and what can you harvest? Something that could grow in a short period of time. Growers had to shift."

Washington corn for grain production is up 18 percent.

"Just farmers taking different avenues because COVID crashed whatever market they're in," said Greg Walter of Schoonover Farms in Odessa, a board member for the Washington Hay Growers Association.

"It's not a contract crop," said Walter, referring to arrangements in which growers are paid to raise a crop for a processor. "The price of wheat was in the dump."

When the early June rains fell in southeastern Washington, in the Columbia Basin, and around the Tri-Cities, the first cutting of hay had already happened. The crop was largely still on the ground in windrows, drying out, when it got wet. When that happens, the quality drops.

Up in the Palouse, extending to Troy, Kendrick, Winchester and Grangeville, Idaho, hay had not yet been cut. When it was, it shifted the prize.

"The harvest went really well. On the flipside, it went badly in the Columbia Basin," said Josh Callen, owner and market analyst for the Hoyt Report, based in Twin Falls, Idaho.

The report covers the hay market in seven western states.

"You saw buyers coming to the Palouse looking for the high-quality hay," said Callen. "The Koreans, Japanese, they want the top-end stuff - nice color, no rain."

When hay is cut, it has to be left to dry first for about three days before it is bailed and covered, either in a shed or a tarp.

Ultimately, for the flatbeds stacked with hay bales passing through Whitman County, many of them were headed to these central Washington exporters, which soon sliced and compressed the bails, loading them into shipping containers to be hauled to the Port of Seattle.

After the virus shutdowns in March, more than 200,000 tons of potatoes in Washington were "repurposed," or given away, because of the drop in restaurant and food service demand.

Much of the ensuing uncertainty led to more hay planting, which by late August, led to burgeoning two-trailer, hay-bale trucks passing through Colfax.

"I know growers who had potatoes seeded already, then plowed it under and planted hay," Walter said. "It's not a bigger crop, but acres are up. Our screwed-up governor screwed up everything for ag."

Potatoes are planted from February to as late as May, often in 120-acre irrigated circles in the Columbia Basin.

With wheat and barley prices down, many judgment calls on what to do with potato fields turned to hay.

An average hay field planted in April would yield 2-3 cuttings in the summer – bales loaded onto trucks, then a month later, another fleet of flatbed trailers packed with bales.

Idaho and Oregon crop changes added to ag shipping. Hay numbers in Idaho are similar to last year, with a decrease in Oregon.

Hay bale trucks are seen on the road more in the summer and straw bales later. Straw is hay (alfalfa, timothy hay) or another crop cut with the seed removed. For example, in Whitman County, in later August and September, after the wheat harvest is complete, some leftover stubble is cut and baled into straw.

As for how much hay is grown locally, the USDA NAS discontinued its hay county estimates program because of funding in 2018.

The final statewide acreage reports will come out in January.

How many hay trucks will be seen next year in Whitman County depends on a variety of conditions..

Garth Meyer is a reporter and sports writer with Free Press Publishing, based in Colfax, Wash., at the Whitman County Gazette.