School boards have decision to make on campus reopenings. 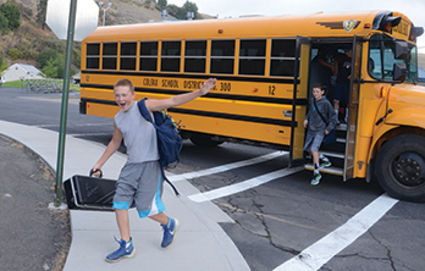 Students return to school in 2016. It is still uncertain what this year's school reopening will look like.

Nine new cases were announced today, Aug. 7, bringing the weekly total to 24, and 114 cases since the start of the pandemic. Whitman County Public Health Director Troy Henderson said 40% of the cases are non-Pullman residents.

Henderson is urging the public to reverse the trend by wearing a mask, social distancing and washing their hands.

Earlier in the week, Henderson had been preparing a recommendation for schools to resume on-campus classes. With the sudden coronavirus surge, he is now recommending schools begin in distancing-learning mode.

The recommendation would be in place "until we go below and trends look like we will stay below 75/100,000/2 weeks," Henderson said.

The numbers refer to the threshhold of 75 new cases per 100,000 people over two weeks. Counties with numbers above that benchmark are being called "high-risk."

According to the U.S. Census Bureau, Whitman County had an estimated population of 50,104 last year. The county would need to have less than 37 new cases over two weeks to drop to "moderate-risk," which is defind as 25-75 new cases over a two-week window.

If schools start the year in distancing-learning mode, things could switch to in-person when the trend turned and stayed low.

"Whitman County Public Health fully supports the American Academy of Pediatrics assessment that, 'Schools are fundamental to child and adolescent development and well-being and provide our children and adolescents with academic instruction, social and emotional skills, safety, reliable nutrition, physical/speech and mental health therapy, and opportunities for physical activity, among other benefits.' Further, in-person education is a critical component to the effective functioning of our communities," a Health Department press release said today.

When questioned if there would be a spike regardless when in-person classes resumed, Henderson said: " Not if folks will wear masks, social distance and wash their hands."

Not everyone will catch the virus, he said.

"It isn't inevitable; we will likely have a vaccine next year," he said. "If we throw the doors wide open and did nothing, our medical system would be overwhelmed, vulnerable folks would die needlessly."

Henderson suggested that if 95% of residents wear masks, we'd see improvements in 3-4 days, with full effect in about two weeks, which is just before schools reopen.

Under the state constitution, local School Boards make the decision to open or close, Gov. Jay Inslee said during a press conference earlier this week.

However, under the governor's orders, schools in Phase I counties of reopening, would need support from the county health officer. Schools in Phase 2-3 counties are not required to have that recommendation.

Whitman County is in Phase 3.

In nearby Spokane County, which is in the more restrictive Phase 2 of reopening, several school districts have already annouced plans for digital learning from home this fall. But the Mead School District is moving ahead with reopening school campuses without a recommendation to do so from Spokane Regional Health Director Robert "Bob" Lutz.

And in nearby Adams County, also in the more restrictive Phase 2, the Lind-Ritzville and Washtucna districts are planning for an on-campus reopening.

School boards statewide have until Aug. 20 to provide a campus reopening plan to the state Office of Public Instruction.

Jana Mathia is a reporter for Free Press Publishing, based in Colfax, Wash., at the Whitman County Gazette and Colfax Daily Bulletin.