Warbirds to fly over Eastern Washington 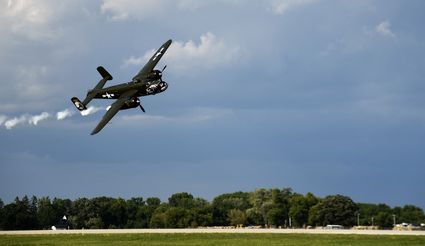 The B-25 Mitchell bomber, made famous in the Doolittle Raid, will lead a formation of four other World War II fighter planes in a July 4 flyover of Eastern Washington.

SPOKANE VALLEY – A small piece of history will pass through Eastern and Central Washington skies on July 4.

Five World War II vintage aircraft owned by Hangar 180 air museum in Lewiston will be conducting a flyover over of the region beginning at 8 a.m. The flight takes them over southeast Washington, through the Tri-Cities area to Yakima, up to Ellensburg, back over Central and Eastern Washington to Lewiston and then up to Spokane where they will layover for an hour at Felts Field.

After refueling, the flight resumes east over Spokane Valley to Coeur d'Alene, Idaho and back home. According to a July 1 news release from the Historic Flight Foundation at Felts, the flyover is the "brainchild" of Lewiston businessman and Hangar 180 owner Gary Peters.

Peters has sponsored the annual "Radials N' Rivers" airshow each July 4. With this year's show canceled due to the COVID-19 pandemic, a new idea came to him in mid-April after taking his Curtiss P-40N Warhawk for a 30-minute test flight after some maintenance work.

According to June 28 story in the Lewiston Tribune, Peters mentioned he flight to a friend and said he would be passing over the town of Wallowa, Ore. His friend, who is also putting together an air museum, mentioned it to neighbors.

"(Everyone) was out in their backyards waving American flags," Peters said of the flyover. "It really warmed my heart."

Peters subsequently hooked up with the Planes of Fame Museum in Chino, California to create the upcoming "Let Freedom Reign" tour this Saturday. Planes in the formation will be the P-40N, the Republic P-47 Thunderbolt, the Grumman F7F Tigercat, the North American P-51 Mustang and a B-25 Mitchell Bomber.

The B-25 is the plane that took off from flight deck of the aircraft carrier U.S.S. Hornet in April 1942 to bomb Japan in the famous Doolittle raid, the subject of the 1994 movie "30 Seconds Over Tokyo" and part of the 2001s "Pearl Harbor." The bomber will fly one-eighth of a mile in front of the other four planes to alert residents to the flyover.

The formation will land at Felts at around 5:45 p.m. and taxi to the Historic Flight Foundation hangar to refuel. While the hangar is closed due to COVID-19 restrictions, the public will be able to view the aircraft from the parking lots at the airport.

The formation takes off on their fifth and final leg at 6:45 p.m.

"In a summer without airshows, this formation will honor our veterans, salute our history and rekindle patriotism on Independence Day," Historic Flight Foundation Chairman John Sessions said in the release. "I hope people will stop by Felt Field to see some of the now rare aircraft that helped win World War II.

Other times and locations for the formation 11:50 a.m. over Moses Lake en route back to Lewiston, 4:45 p.m. over Pullman/Moscow, 4:55 over Palouse en route to Garfield, Oakesdale, Rosalia, Spangle, Reardan and then Spokane.